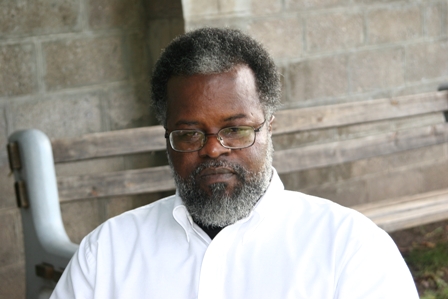 Chairman of Culturama 2008  and Advisor on Culture in the Nevis Island Administration (NIA) Mr. Halsted “Sooty” Byron, issued a call to the public to support the youth in particular when they indulged in all things positive, rather than seek stall their progress.

During an interview with the Department of Information on August 14, 2008, Mr. Byron made reference to Nevis youngest ever Senior Kaiso Monarch De Inspirer (Master Husani Paris), who for some members of the public, had echoed sentiments that the 14 year old was too young to compete with the adult contenders.

“It is important for us to give full support to the youths, especially when they are involved in things positive. Ever so often, in every sphere of life, a young person would come through and outperform others in sports, the arts, culture in everything.

“Especially in these times where there are so many negatives associated with our young people, we need to give the encouragement to those who are involved in positive thing. Do not hold back the youths we need the youths to participate,” he said.

Meantime, Husani’s mother Ms. Julitta Paris, echoed similar sentiments when she spoke to the Department of Information on August 13, 2008, after her return to Nevis. She had accompanied her son to Anguilla, where he carried out his first tour of duty last weekend to represent the island at a Leeward Islands calypso contest. 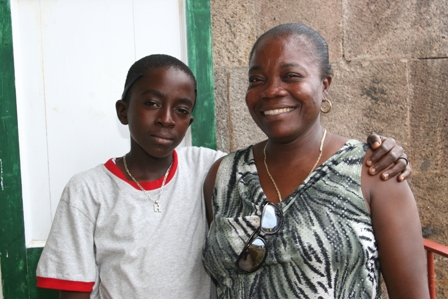 “We need to encourage the youths more. I would like to see him continue to motivate and inspire all. Right now the critical part of life is the youth the violence and the things they are involved in. I would like to see, as a parent, that all parents hold on to their boys and girls and get them involved in more positive things around them.

come into the art form of calypso because as he rightly said the older ones are now stepping down so it’s left up to the youths to now bring it up,” she said.

Meantime, Husani described his first stint as an ambassador for Nevis as a good experience, which allowed him to educate others about his island

“Representing Nevis and being an ambassador for my country has been a good experience because it allowed me to educate people in the  world that in my song ‘The Country is Moving on’ and give them some history about St. Kitts and Nevis as a Federation. 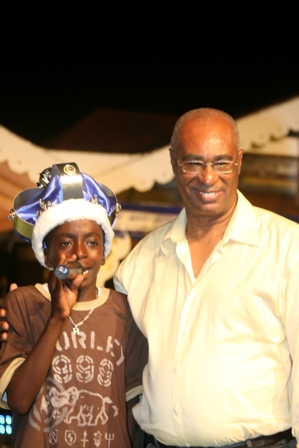 “Also it was good opportunity for me as I am young. I met all the kings of the Leeward Islands and it was a good experience. They encouraged me they were happy to see me and said it was good to see that the younger generation was stepping up and getting involved,” he said.

The 14 year old Senior Kaiso Monarch, who made history when he was crowned Junior and Senior Monarch in the Culturama 2008 summer festival, said with an air of confidence that the transition from the junior calypso to the senior contest in a matter of days was no big deal for him.

“Well moving from the junior to the senior was not really a big deal to me. I just went out and performed at my best and I just made sure I got my point over to the crowd because once they got my point, I already felt like a winner and that was also a very good experience for me and I just went in to have fun. It was a good experience for me to see I was so small with the big guns and I was not intimidated by them,” he said.

Notwithstanding, once he was announced winner, Husani explained that he was contented since he knew he had made history.

“When I was announced winner I felt great because first of all I made history – the youngest child to win a senior calypso contest and also the first person to win two crowns in one festival and I felt excited. There is where I felt I would have been an ambassador for my country and where I [where] go I would represent the country at my best. It was an exciting experience, because it was a lot of hard work preparing for those shows and to see that it paid off, it was good.

“I feel good eh because my goal really is to educate, to inspire and to motivate and to see that I won those two shows, it would help me in my three goals to motivate, educate and inspire. All my songs I am singing, those are my main goals and as I said once I get my points over that’s the best thing,” he said.

Husani said his immediate future would entail the continued building of his sell esteem and confidence and the continuation of his quest to motivate and inspire young and old alike.

“I would like to build my self esteem and my self confidence and to continue to educate motivate and inspire young people, not only young people the older ones as well and just keep inspiring the young ones, so that they can keep off the roads and so on because there is a lot of violence taking place in our country today and I would like to make a change in the world not only the island,” he said.

As for words of wisdom he told his peers his peers to aim for excellence always.

“Believe in yourselves, there is nothing you cannot do. Aim for excellence, there is no task that you cannot reach and you must always aim for the stars. Also, always strive to make a change in your communities, because right now we are looking for young ambassadors for the country and young people have to rise because the older ones will all die out and it will be up to us to carry on,” he said.

He is expected to perform on August 16, 2008 at the Leeward Islands Youth Cricket Tournament in St. Kitts.