NIA-CHARLESTOWN, NEVIS (March 1ST, 2011) — It was an emotional rollercoaster for parents, teachers and supporters of the Nevis Literary and Debating Society [LDS] as they gathered outside the arrival lounge of the Vance W. Amory International Airport, eager to welcome the victorious team.

The chant “let them out” was interrupted by the disappointing sound of “awh” whenever an airport employee, instead of a student, walked through the door.

The 22-member team of debaters, supporters and staff sponsors, with trophies in hand, returned from Tortola, yesterday [Feb. 28], as the 2011 winners of the Leeward Islands Debating Competition [LIDC].

In addition to recording his appreciation to the team’s corporate sponsors, principal of the Charlestown Secondary School and the Nevis Sixth Form College, Mr. Edson Elliott, said he was “overwhelmed and definitely happy for the institution and the Nevis Literary and Debating Society.” 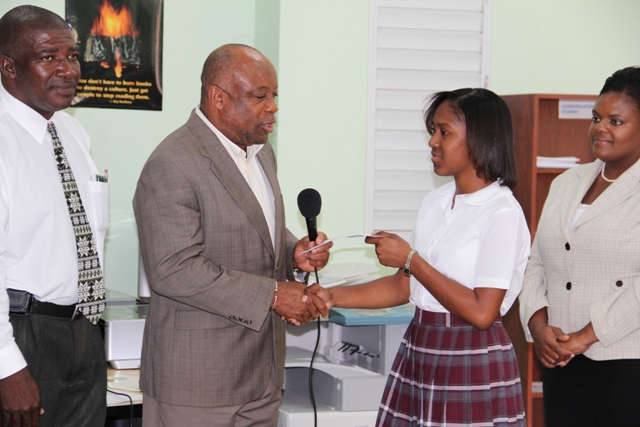 The Honourable Hensley Daniel presents sponsorship cheque on behalf of the Nevis Housing and Land Development Corporation to President of the Nevis Literary and Debating Society Ms. Opal Parris

“Today we are celebrating this success but we have to remember that we came from a long way in that there is the financial aspect in preparing for the competition as well. The debaters themselves and I know that we had to engage a number of persons for the team to be well prepared,” Mr. Elliott said.

Among those receiving high praise were the Nevis Island Administration’s [NIA] Deputy Premier and youth minister the Honourable Hensley Daniel and Minister of Housing and Land the Honourable E. Robelto Hector.

Minister Daniel, on Minister Hector’s behalf presented a cheque from the Nevis Housing and Land Development Corporation [NHLDC] to the team prior to the trip. 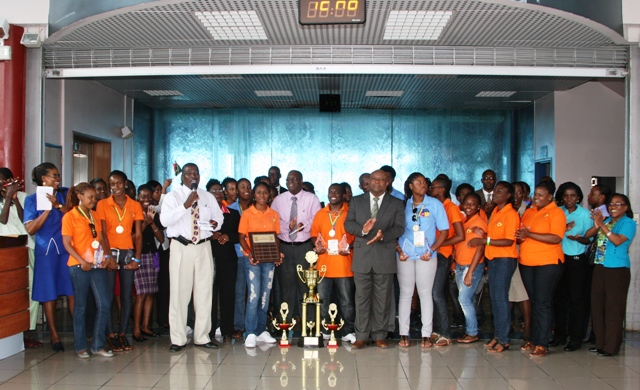 The cheque, like Mr. Daniel’s hands-on assistance during the preparatory stage, recorded the NIA’s commitment towards education.

“We have sought to set the tone from the top so that even though the Land and Housing Corporation is not per se an institution which focuses exclusively on education, all of the units of government are pointing in the same direction with regards to the level and importance of education and development of our community,” he explained. 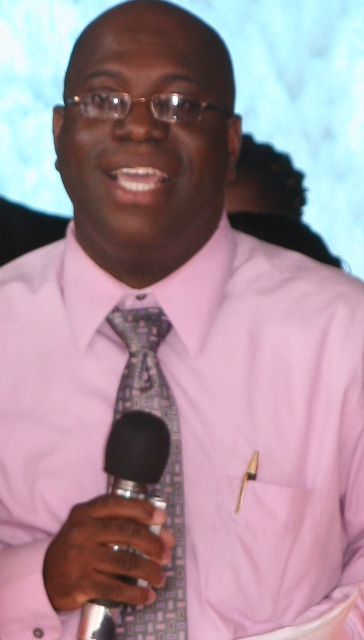 The school’s deputy principal, Mr. Juan Williams, described yesterday’s brief ceremony as “a gratifying moment” adding that “there was no doubt in his mind that the school had sent off a top-notch team that was capable of winning.”

“Your victory also proves that team Nevis is genuine debating powerhouse. This victory is just your reward for your presentation, your preparation, dedication, hard work and sacrifice. Thank you for representing your country and this institution so well,” Mr. Williams said to the debaters.

While many persons congratulated the students for the victory, President of the Nevis LDS Ms. Opal Parris publicly thanked the staff sponsors: Mrs. Sheila Hanley, Ms. Shanelle Simmonds and Ms. Shavane Joseph for their support.

“The staff sponsors have done a marvellous job. They have been behind us 100 percent and they worked hard and tirelessly and I must register our thanks.

“To the staff and principal of the Charlestown Secondary School and the Nevis Sixth Form College, I would like to thank you guys as well because the teachers were always reasonable and understood when we had to miss maybe a few classes to get things done for the Literary and Debating Society so we thank them for that,” she said. 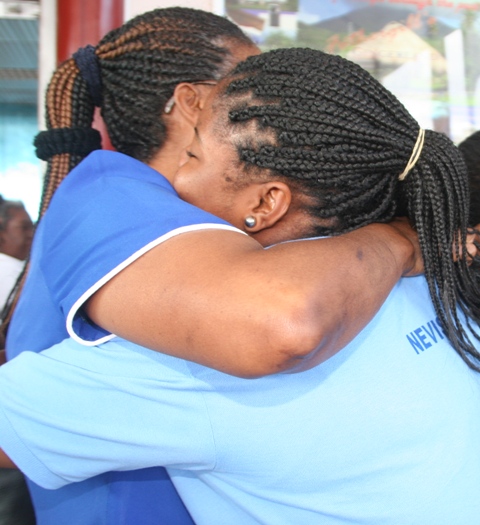 Warm embrace between mother and daughter

The “welcome home and congratulations ceremony” was immediately followed by a motorcade along the island’s main road.