(CHARLESTOWN, NEVIS–MONDAY, FEBRUARY 28TH, 2011) Ms. Phillichar Hobson who represented the Parish of St. Thomas, walked away with the coveted Miss NRP 2011 title on Saturday night, from a field of five contestants who represented all the constituencies on Nevis.  She was coronated by Premier of Nevis and leader of the Nevis Reformation Party (NRP), Hon. Joseph Parry and queen pageant committe member, Idona Browne, much to the delight of hundreds of spectators who had gathered at the Cultural Complex in Charlestown to witness the show.

The show which organizers said exceeded their expectation was made up of five segments –Icebreaker, Ambassadorial Wear, Talent, Evening Wear and Interview.

“The Miss NRP Queen show was a show of creativity and class and Miss Hobson expressed that with her eloquent speaking, stage presence and her unique talent exhibition,” Premier Parry said. 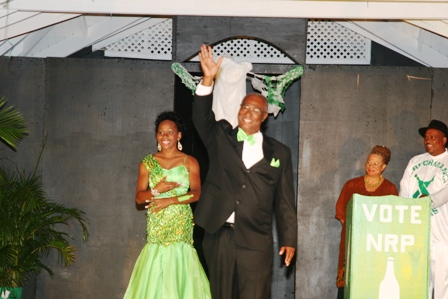 During the talent segment, Miss Hobson, who was sponsored by Best Deal Construction, captured the crowd with her exhibition of a dramatization which highlighted the achievements of the Nevis Reformation Party.

The show was hosted by Mr. Walter Morton and Mrs. Ali Guilbert, who provided both commentary and comedic relief.  The interview segment was hosted by Walter Morton who made the girls feel relaxed and comfortable to take on the usually difficult task, but each contestant fared well. They answered questions formulated by the Queen Show committee. 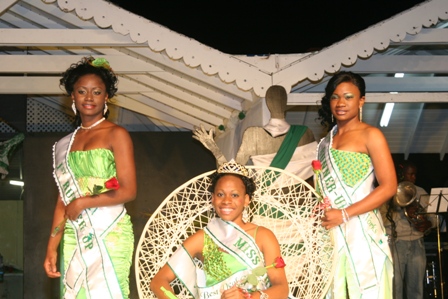 NRP Queen and her court

The evening wear adorned by the ladies, saw a variety of attractive and creative gowns in varying shades of green (the NRP’s official colour).  Miss Hobson’s gown stood out based on the reactions of the audience once Phillichar entered the stage.

Mrs. Monica Tyson, Pageant Organizer said she was pleased with the quality of the show and she expressed gratitude to all the sponsors, chaperones and committee members who assisted in the production of the event.