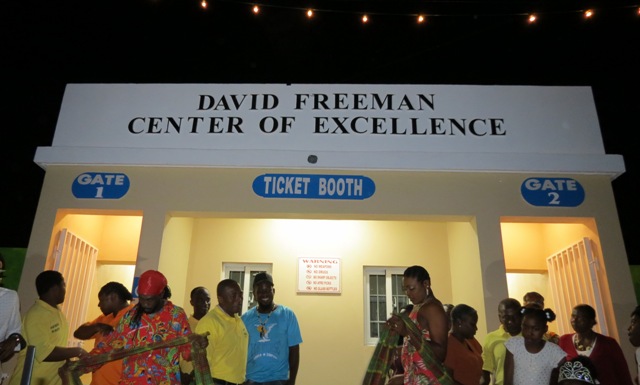 Moments after family members unveiled the David Freeman Centre of Excellence at Market Shop in Gingerland at the official opening and naming ceremony on November 28, 2019

NIA CHARLESTOWN NEVIS (November 29, 2019) — Hours after the first multipurpose facility in the St. George’s Parish on Nevis was officially opened and named on November 28, 2019,  after Mr. David Freeman of blessed memory, a cultural icon from Gingerland, a member of his family reacted to the honour bestowed on his father.

Mr. Colin Freeman, a son of Mr. Freeman, told the Department of Information, when contacted for a comment on November 29, 2019, that the family is thrilled by the honour bestowed on their father.

“The Freeman family would like to convey our heartfelt thank you to the Nevis Island Administration for naming the newly built multipurpose centre at Market Shop, Gingerland after our patriarch David Freeman.

“We think it is a perfect name for that beautiful edifice, considering the purpose for which it was built. We have to say thank you for bestowing such a great honour on David Freeman though it may be posthumous because he really put his all into the preservation of culture in Nevis,” he said.

Meantime, Hon Eric Evelyn, Minister of Social Development and Culture, the driving force behind the facility expressed his satisfaction with the opening ceremony

“I am exceedingly pleased and my heart is full with the way things unfolded at the grand opening of the David Freeman Centre of Excellence. I think it was an exceptional evening of immense talent that brought out the best of Gingerland.

“The Nevis Island Administration must be highly commended for the investment that has been made in the people of Nevis. It was a very proud moment for Gingerland and the whole of Nevis, and I am delighted that I was a part of the journey and a part of the

historic event. I was very pleased with the support from members of the general public, and persons are happy that the facility was named after the late David Freeman,” he said.