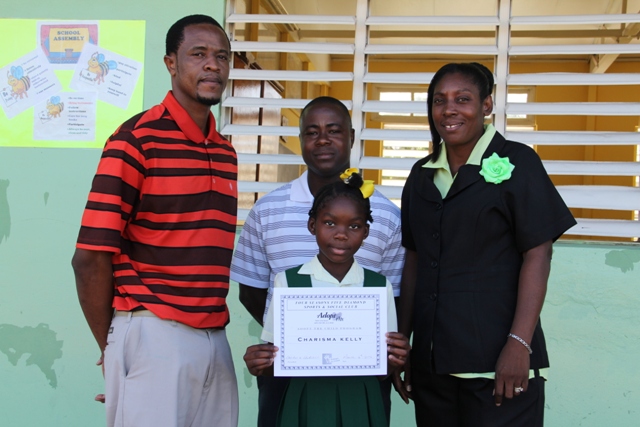 Ignacio Ottley Vice President the Four Seasons Five Diamond Sports and Social Club, Club President Lavorn Lawrence and Mrs. Janice Richards Principal of the Ivor Walters Primary School with the Four Seasons Five Diamond Sports and Social Club scholarship recipient Charisma Kelly
NIA CHARLESTOWN NEVIS (MARCH 10, 2014) – Charisma Kelly, of the Ivor Walters Primary School and Alicia Wallace of the St. James Primary School were both the recipients of monetary donations towards their education from the Four Seasons Five Diamond Sports and Social Club on March 06 2014.
During the award ceremony hosted at both the Primary Schools, President of the Social Club Lavorn Lawrence, gave a brief overview of the Club and explained what its Adopt a School programme was about.
“We as a Club started about three years ago and we decided last year, to start adopting a child in every primary school on the island. The Ivor Walters Primary School was the first recipient and Miss. Kelly, who was selected by the staff and the guidance counsellor, will be looked after by the school in terms of our donation.
“The donation is small, it’s only a start and we will try as much as possible, in our endeavours, to assist wherever possible… It’s all part of our fundraising efforts that we put together. Its funds that we are giving out from some of our bake sales, after party dance, a show which we had a couple of years ago and a queen show which we did. These funds are coming out of those, so Charisma you are the lucky child this morning,” he said.
Mr. Lawrence said although only two students were awarded this year, the Club intends to award other students in the future.
“Don’t feel left out the rest of you. Next year we might be doing somebody else, so you never know. So this year it’s your turn and I hope it goes a long way in assisting you,” he said.
In response, Mrs. Sofia Wallace mother of the recipient at the St. James Primary School expressed her gratitude for the donation towards her daughter’s education. 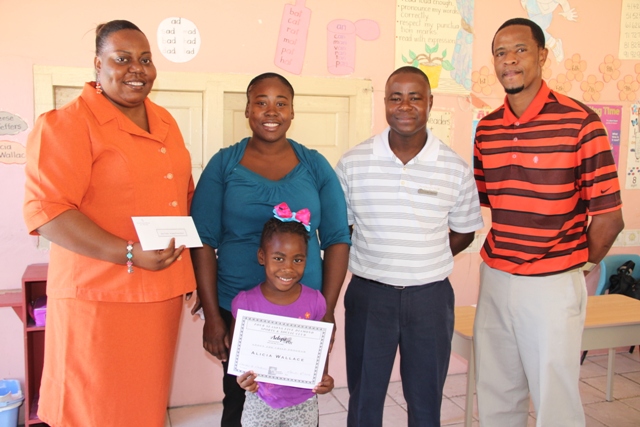 “I am very grateful for this. I really appreciate it and I want to thank the Four Seasons Club for having us in mind. We really appreciate that and I am sure that the school will do what they can with it. Thank you,” she said.
Principal of the St. James Primary School, Daniele Wallace also conveyed her gratitude to the Club for its donation and encouraged other business partners to contribute to the community as well.
“We are always grateful no matter how small or large. We are grateful that business places still find it important to make a contribution to the schools because we know, children from our schools will be the ones working in those places, making their contribution to the businesses and to Nevis…
“Keep up the good work and I do hope, as you said, other businesses would see it as a venture, a gesture that they would also like to take up. Thank you very much,” she said.