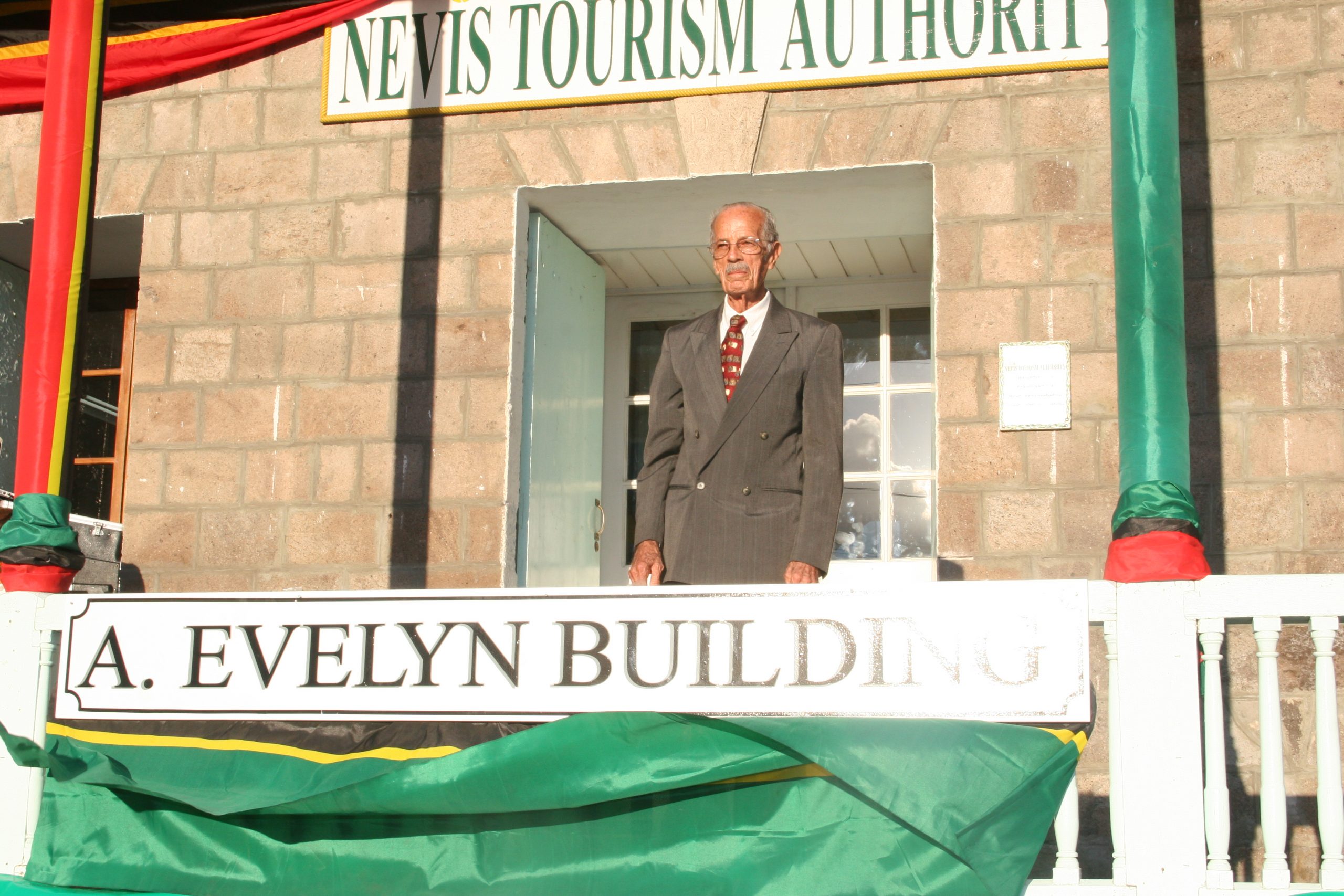 The late Mr. Arthur Evelyn, the First Minister of Tourism on Nevis, moments after unveiling the new name of the Old Treasury Building in Charlestown in 2010 renamed in his honour by the Nevis Island Administration

NIA CHARLESTOWN NEVIS (August 23, 2021) — The following is a tribute from the Nevis Historical and Conservation Society (NHCS) on the passing of the late Mr. Arthur Evelyn.

The management, staff and members of the Nevis Historical and Conservation Society offer our most sincere condolences to the family and friends on the passing of one of Nevis’ most committed citizens and one of our Founding Fathers, Mr. Arthur Evelyn, who died on Friday, August 13, 2021.

Born in Butlers Village on June 25, 1928, Arthur Evelyn rose to become one of Nevis’ most beloved sons and an iconic figure. He attended Public Elementary School at Whitehall up to Standard 7, eventually finding employment in a drug store with a pharmacist from St. Kitts.

He was an eager learner for his new trade but there was no training available locally for pharmacists; being unable to travel abroad to further studies, he was fortunate to receive training from another pharmacist from Antigua who was working at the hospital. Young Evelyn continued his work at the pharmacy until eventually seeking to branch out on his own.

Unable to secure a loan for his own drug store, a wealthy Englishman in Nevis instead opened a drug store himself and made Evelyn manager. Eventually Evelyn was successful in getting a loan from a good friend and established the iconic Evelyn’s Drug Store in 1946. For decades it was the only drug store on Nevis and is still in operation today.

In 1967, Mr. Evelyn became the first Chairman of the newly formed Nevis Local Council, and – together with Dr. Simeon Daniel – not only sought to bring about improvements in the basic infrastructure of the island, but also solicited financial support to enable the presentation of a petition for secession in the United Kingdom. While individual independence was not attained for Nevis, their actions boosted the morale and pride of Nevisian people and ensured that Nevis gained significant control over its own affairs.

When the Nevis Island Administration (NIA) was officially inaugurated in 1983, the new Premier, Dr. Daniel appointed Mr. Evelyn the first Minister of Agriculture, Lands, Housing, Labour and Tourism (1983-1987). During this time, the Nevis Housing and Land Development Corporation (NHLDC) was established and he oversaw the first land reform programme in Nevis, giving the people of Nevis the opportunity to own land.

Because of his contributions to the development of Nevis and dedication to its people, the Old Treasury building on Charlestown’s Main Street was renamed in his honour in 2010.

Mr. Evelyn was active and influential in a number organisations in Nevis over his lifetime, including the Mental Health Association, the Blind Light and Visually Impaired Society, The Lions Club, Culturama, the Nevis Turf and Jockey Club, the Jaycees (Junior Chamber of Commerce) and the St. Paul’s Anglican Church vestry.

In 1980, his passion for Nevisian natural and cultural heritage and his belief that government shouldn’t be responsible for everything, he nurtured the establishment of the Nevis Historical and Conservation Society as a non-governmental organization, with the objective to protect and preserve the history and heritage of Nevisians.

During his years as a Minister, he made sure that he used the Society as support for the important aims of the new Nevis Island Administration.

He lived an extraordinary life of service to his community, and truly embodied the federation’s motto “Country Above Self.” The Society owes Mr. Evelyn an immense debt of gratitude and, in grieving with his family, friends and colleagues, we also gain much comfort from his remarkable life.

May he Rest in Eternal Peace.