Deputy Premier of Nevis and Minister of Culture and Tourism Hon. Mark Brantley (r) and Chris Collins of JC Tours at the Charlestown Pier on July 29, 2014
NIA CHARLESTOWN NEVIS (July 30, 2014) — Deputy Premier of Nevis Hon. Mark Brantley, who is also responsible for  Culture and Tourism, urged Nevisians to embrace visitors and returning nationals to the island, who were on Nevis for the Homecoming and the Culturama 40 Celebrations.
Mr. Brantley was at the time on the Charlestown Pier on the evening of July 29, 2014, when a large group dubbed “The UK Invasion” disembarked amid the sounds of live steel pan music and welcome drinks of Killer Bee and rum punch.
“We already have a lot of people on the island. I think this ‘UK Invasion’ that we are now seeing is certainly going to add something to that. So we look forward to seeing them at the shows.
“We are asking the people of Nevis to be our usual hospitable selves and show them a fantastic time,” he said. 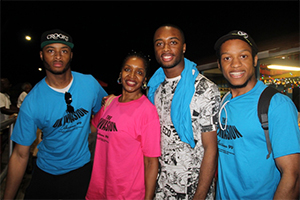 The Minister explained, that the group from England, was born out of an initiative he had discussed, about a year ago, with Chris Collins of JC Tours, who subsequently organised the group’s two-week visit to Nevis. He also added, that their stay on the island would contribute to the island’s economy.
“This is an initiative we talked about, nearly a year ago, to try and make it happen for Culturama 40, on our first ever Homecoming. I want to thank Chris for delivering. JC Tours has packaged this for their patrons and they have brought them all the way from the UK to come here to enjoy Culturama with us.
“They are going to be here for two weeks and we have hotels that are sold out. Oualie Beach I think is sold out. Mount Nevis is sold out and so, this is a huge economic injection for us. This is part of what we have been trying to deliver here, partnering with nationals abroad to bring them home and this Homecoming Celebration we think is going to be fantastic,” he said.
Meantime, Collins expressed satisfaction with being able to bring the group to Nevis. 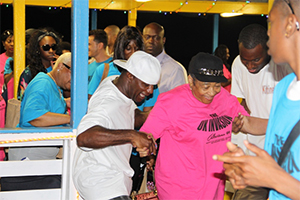 “It’s indeed a pleasure to be here this evening. It’s been a long day for us but nothing good comes easy and Nevis is no exception to that. We are happy to be here. I am happy to be here.
“This is home for me because my parents, my grandparents are all from here. To be doing something like this is so meaningful at this time, 40 years of Culturama, 40th anniversary and at the same time to bring nationals and children of nationals back to Nevis, to see and experience a once in a lifetime Culturama 40. It’s only going to be 40 once,” he said.
Sandra Brown and her son Travaughn whose roots are from Brown Hill and Gingerland, in a brief comment moments after they had disembarked from the MV Prince Devonte J, told the Department of Information that they, too, were pleased to be a part of the Culturama and Homecoming Celebrations.
“Basically it is a big family reunion because all my family got together and decided we are going to come out to the island where our family is from. Everyone decided to come back. We are expecting to have a good time with the carnival atmosphere and I know it’s really that type of island. I am happy to be here. 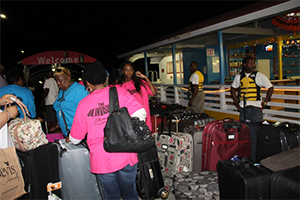 “This is my second time here but I was younger, I was too young to remember the last time,” Travaughn said.
His mother summed up her expectations and noted that she was looking forward to a good time.
“I am just expecting to have a nice time. I was thinking of coming to St. Kitts Christmas time but… said come to Culturama 40-year-anniversary you can have a good time so told one person and told another person and the next minute there are 96 all from England to celebrate Culturama,” she said.
When asked how she felt now that she had actually arrived on Nevis her response was a simple one.
“I can’t believe! It’s amazing! The weather is just I tell ya!  Seeing is believing. So when we get back I can’t wait to tell people about the experience we had,” a visibly elated Sandra said. 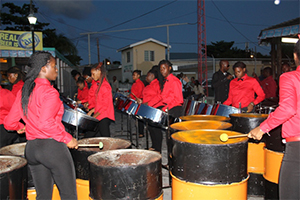 Among the activities scheduled for the group are a Nevis Island Tour on July 31, an All White Sunset Cruise on August 01, a catamaran trip on August 08, a Leaving Party on August 09 and a Leaving Dinner on August 10.
On the night of their arrival, there was a welcome dinner in their honour at Oualie Beach Resort.