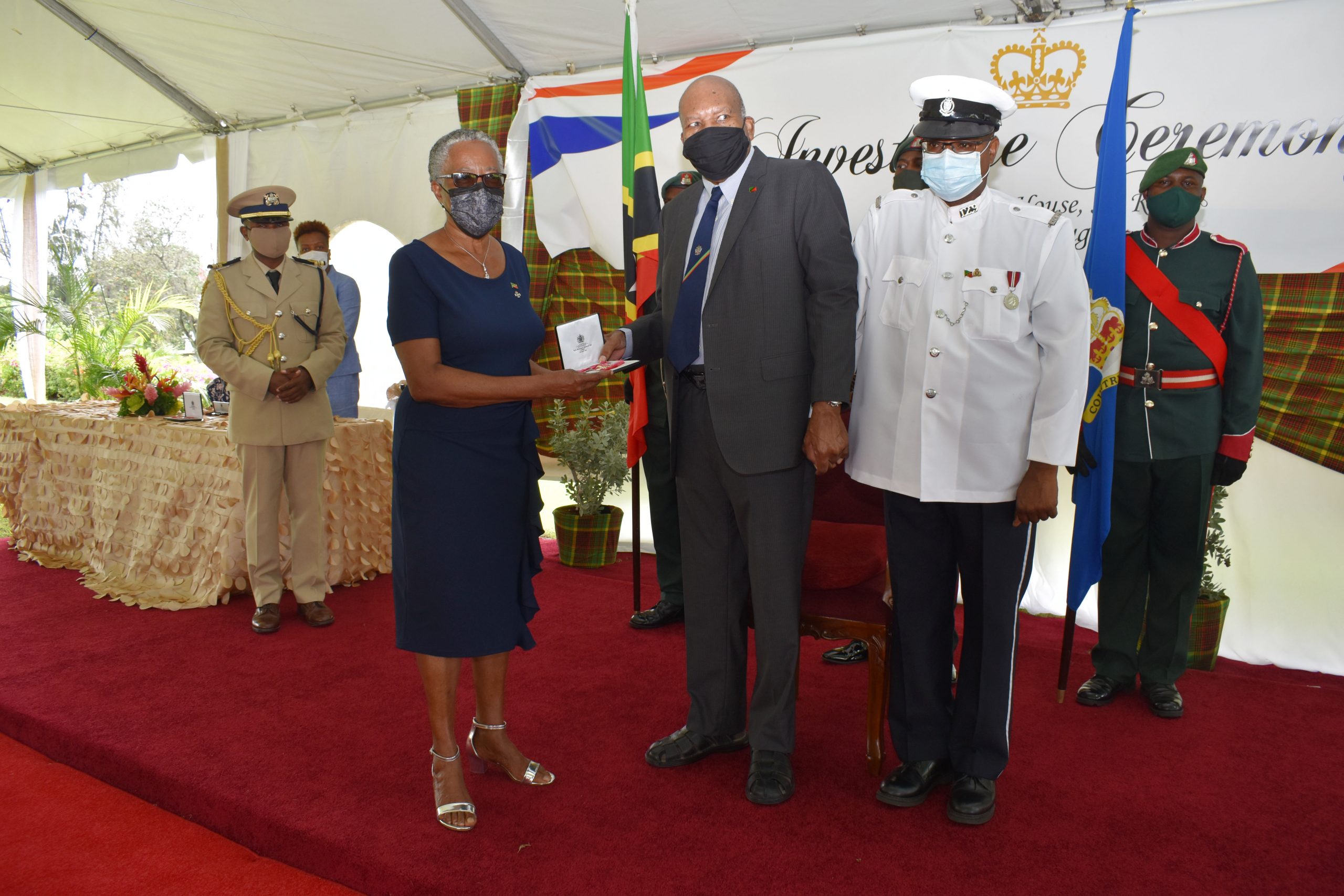 Sir Tapley Seaton, Governor General and representative of Queen Elizabeth II in the Federation, presents Her Honour Mrs. Hyleeta Miranda Liburd, Deputy Governor General for Nevis with the award of the Most Excellent Order of the British Empire (OBE) for her contribution to public service at an Investiture Ceremony at Government House in St. Kitts on August 19, 2021

NIA CHARLESTOWN NEVIS (August 24, 2021) — Three Nevisians were among eight persons who were formally invested with Queen Elizabeth II New Year Honours, at an investiture ceremony at Government House in St. Kitts on August 19, 2021.

Sir Tapley Seaton, Governor General, who is the Queen’s representative in the Federation, presented Her Honour Mrs. Hyleeta Miranda Liburd Deputy Governor General for Nevis with the award of the Most Excellent Order of the British Empire (OBE) for her contribution to public service; Mr. Collin D.A Tyrell, with the Most Excellent Order of the British Empire (MBE) for his contribution to community service; and Mr. Hilroy Patrick Brandy, Commissioner of the Royal St. Christopher and Nevis Police Force with the Queen’s Police Medal (QPM) for his contribution to policing and leadership.

The Deputy Governor General, who was born in Gingerland, was described as an educator whose career spanned 39 years of experience in her field. A former Principal Education Officer, Headteacher and classroom teacher who regardless of her job title three things were always clear – her love for people especially children, her passion for teaching and her commitment in ensuring the success of all her students.

“She is a firm believer that there is good and potential in every child and no child should ever be left behind. This is evident in her commitment to tutoring children in reading and math, after working hours throughout her career and during her retirement and in the programmes she instituted within the Education System during her career.

“She has also conducted many workshops on various topics associated with Education and Parenting,” was said in her profile.

In September of 2018, she assumed the role of Deputy Governor General for Nevis which she said she accepted with humility and pride, a position which gave her the opportunity to serve the people of her beloved island Nevis more diligently, utilizing her leadership, counselling and teaching skills.

The second awardee, Mr. Tyrell who was born and raised in Hermitage became known for his contribution to the political sphere in Nevis. Prior to his involvement in politics, he exhibited a deep love for all things Nevis from an early age.

He was educated at the Gingerland Infant School, Gingerland Junior School and Charlestown Secondary School and later earned a Bachelor of Arts in Sociology from Toronto’s York University.

According to his profile, in 1983 Mr. Tyrell returned to Nevis to join the newly established Nevis Island Administration (NIA).  As a member of the Civil Service, he was able to combine his love of people and his island Nevis, to help foster and administer the policies of a newly independent country.

He was responsible for directing the affairs of the Ministry of Culture.  As an Assistant Secretary in the Premier’s Ministry, he pioneered the development of a vibrant Youth Skills Programme that resulted in economic benefits for the participants and the island.

He later moved to the private sector only to return to the political sphere in 1987.

Mr. Tyrell became an early member of the fledging Concerned Citizens Movement, becoming a nominated member after five years.  During the period 1992 to 1999 he served as a Junior Minister with responsibility for Community Affairs, Youth and Sports, Culture and Women’s Affairs.

In 1999 he returned to Canada and graduated from the University of Windsor Law School in 2002 before venturing back to Nevis to open a private law firm.  Ten years later he resumed his contribution to Nevis’ political, cultural and social arenas when he was appointed Legal Advisor to the Nevis Island Administration.  Presently he serves as Advisor to the Minister of Culture.

In 2019, his life-long efforts on Nevis’ behalf were recognized with the Independence Award for his stellar contribution to community service and government.

In his profile, Commissioner Brandy was said to be a member of Royal St. Christopher and Nevis Police Force for more than 40 years.

He graduated from his initial Police Training in 1981 and worked at several departments, units and stations doing general policing. In 1988 he was awarded as Constable of the Year in the first and only Constable Awards in the Federation.

He was later transferred to the Criminal Investigation Department (CID) and while there distinguished himself and made a name for himself in policing.

During his 18-year tenure at CID he moved up the ranks from Corporal to Inspector of Police. As the officer in charge of the department he received extensive training from agencies including the US Federal Bureau of Investigations (FBI), Caribbean Anti-Money Laundering Programme, Caribbean Financial Action Task Force, and the National Drug Intelligence Center in Canada.

Mr. Brandy left the department in 2010 when he assumed the Command position of the Nevis Division. In 2002 he became a member of the St. Kitts and Nevis Financial Investigation Unit and the Financial Intelligence Unit and conducted sensitive financial investigations on behalf of foreign countries and agencies. As a result of the assistance he rendered, St. Kitts and Nevis was removed from the OECD FSF and FATF blacklist.

Also present at the ceremony was Dr. the Hon. Timothy Harris Prime Minister of St. Kitts and Nevis and His Excellency Vance Amory, Ambassador in the Office of the Prime Minister.