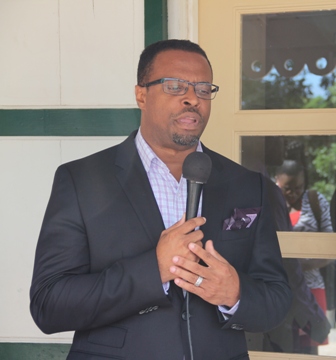 Minister of Tourism and Deputy Premier on Nevis Hon. Mark Brantley delivering remarks at a press briefing outside the Ministry of Tourism at Bath Hotel, Bath Plain on December 16, 2013.
NIA CHARLESTOWN NEVIS (DECEMBER 17, 2013) –Deputy Premier and Minister of Tourism on Nevis the Hon. Mark Brantley, shared, with the media, some new initiatives the Ministry of Tourism wasexploring fora successful 2013/2014 tourism season.
The announcement came at a press briefing hosted by the Nevis Island Administration (NIA) at the Bath Hotel, Bath Plain on December 17, 2013,to announce the Fly Montserrat service from the Vance W. Amory International Airport at Newcastle,Mr. Brantley pointed to thenew initiatives explored by the Ministry of Tourism which he saidwere geared toward a prosperous and enjoyable tourism season.
“We have been promoting several new initiatives. We have met with the airport authorities in St. Maarten as we try to encourage that airport which is a very popular and a very widely used airport, to become a hub for Nevis and so we’re looking especially through the European link, to mix and match our hub…We continue, of course, to partner with St. Kitts as well but also San Juan, Puerto Rico.
“We are trying to look at all the variables to ensure that our airport is not only viable but it’s thriving and what we think is also the benefit of all stakeholders, those locals who are travelling and the tourists who are coming in to enjoy what we have,” he said.
The Minister of Tourism also expressed gratitude to Fly Montserrat for the new partnership forged and invited the travelling public to use the opportunities made available to them at the Vance W. Amory International Airport.
“Captain Harris, I want to thank you for being here and to say to you that we welcome Fly Montserrat. We at the Administration have made a concerted effort to attract airlift into the Vance Amory International Airport…We are very happy to welcome Fly Montserrat and so, thank you for taking up the challenge. 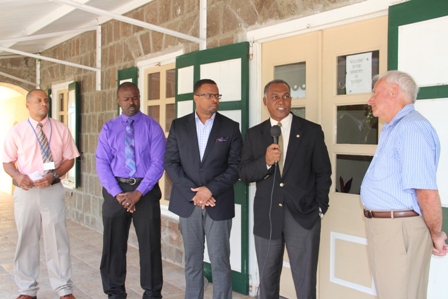 “I ask all of the people out there who are travelling this season and in 2014 and beyond to use the service of the international airport,” he said.
Meantime, Chief Executive Officer of theNTA Mr. Greg Phillip shared other new initiatives under consideration by the NTA that would promote the tourism season as well as cater to the locals who were seeking to travel abroad.
“We are also going to be reaching out to the Antigua Tourism Authority, to ensure that there is an exchange between Nevis and Antigua as it relates not just to the service of the flight but as it relates to hotel accommodation and hotel stay packages that include your airline ticket.
“Don’t forget the important thing also for Nevisians is the convenience. The convenience of simply going into our own local airport and leaving there and going to any destination that you want to get to and coming back directly into Nevis,” he said.
Also present at the press briefing were Premier of Nevis Hon. Vance Amory, Manager of the Vance W. Amory International Airport Stephen Hanley, and, Chief Executive Officer of Fly MontserratCaptain Nigel Harris.
The vote of thanks was delivered by Manager of the Vance Amory International Airport Mr. Stephen Hanley.