President of the Nevis National Women’s Council Ms. S. Patricia Claxton receives a token from Assistant Secretary in the Ministry of Social Development Ms. Michelle Liburd while other members of the Council look on
NIA CHARLESTOWN NEVIS (December 17, 2013) –The Nevis National Women’s Council (NNWC) has become a reality, thanks to the efforts of the Social Services Department’s Gender Affairs Division. The Council was formed on December 12, 2013,during a meeting at the Nevis Credit Union conference room, under the guidance of Gender Affairs Coordinator Ms. Lorraine Archibald.
Ms. S. Patricia Claxton emerged as the Council’s President with Mrs. Vernie Amory as Vice President. Mrs. Shirley Huggins will serve as Secretary and Mrs. Charlene Huggins as the Council’s Treasurer. The Assistant Secretary/Treasurer will be Ms. Shana Howell and the Public Relations Officer Mrs. Clara Walters while her assistant will be Ms. Verline Pemberton.
The floor members who will serve on the Council are Mrs. Gloria Anslyn from the St. Paul’s Parish, Mrs. Lydia Thompson-Claxton from the St. John’s Parish, Mrs. Adina Taylor from the St. George’s Parish; Mrs. Carolie Wallace from the St. James’ Parish and Sergeant Ilena Phillip from the St. Thomas’ Parish.
The formation of the Council followed a challenge by Junior Minister responsible for Social Development in the Nevis Island Administration Hon. Hazel Brandy-Williams when she delivered an address at a symposium held at the Mount Nevis Hotel on March 5th2013 which marked the observance of International Women’s Day on March 8th. 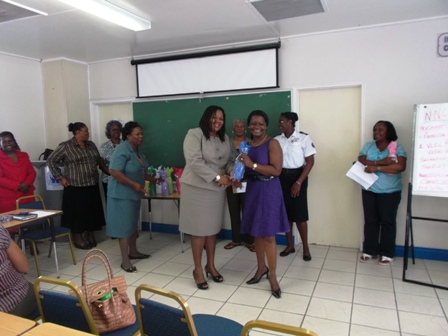 Out of the symposium came a number of issues and recommendations but, in Mrs. Brandy-Williams’ address, she expressed interest in the formation of a voluntary, non-governmental and non-profit Women’s Council on Nevis that would seek to advance the cause of women and would guarantee the integration of women in all facets of the society.
The NNWC can now collaborate with other stakeholders, among them, women’s groups, Police, church, social services, the legal system, schools, health system, Teachers Union and the mediathat would help it to meet its objectives.
The organisation can now move to be registered as a Non-Governmental Organisation (NGO) and a non-profit organisation.
Also present at the meeting were Assistant Secretary in the Ministry of Social Development Ms. Michelle Liburd, Counsellor Mrs.Ivorcia Hanley-Browne and Gender Officer Mrs. Shelly Jones-Liburd.