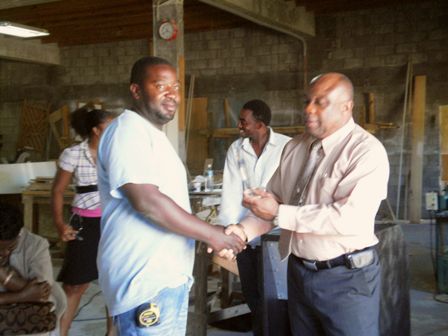 NIA-CHARLESTOWN NEVIS (April 04, 2011) — Two young Nevisian Entrepreneurs from Cox Village were honoured on Thursday by the Department of Youth through the Ministry of Social Development in the Nevis Island Administration (NIA), for their continued contribution to the development of Nevis.

Mr. Curtis Hendrickson and Mr. Morris Stapleton joint owners of a furniture manufacturing company at Long Point called Superior Interior became the fourth and fifth awardees of a youth awards initiative which commenced in January. Both men were saluted for their work in the field of Joinery and Construction.

Minister responsible for Youth on Nevis Hon. Hensley Daniel hailed the efforts of the awardees and described them as young men who epitomised hard work, discipline and had good business sense. He said the Department wanted them to know that their contribution was valued.

“This programme started a few months ago where at the end of each month we lift up two young to the people of Nevis who have shown themselves to be responsible and productive citizens.

“We are doing this at a time when the deficit language in forming young people speaks often to the negative things and this programme is to point to the positive things,” he said.

In Mr. Daniel’s view the young people of Nevis represented both challenge and opportunity and in the case of the awardees they represented the latter.

The Minister registered his satisfaction with Morris who he said had made use of a new opportunity he had pointed him to in the field of construction, an area which has outside his expertise in joinery. 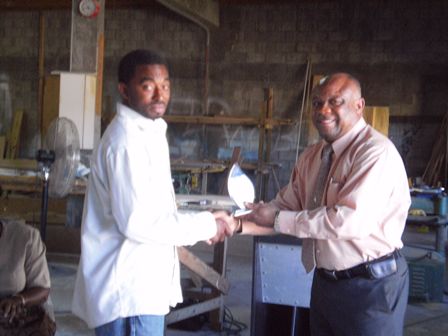 “I am particularly pleased this afternoon because I have taken the responsibility to point Morris in a new direction in the field of construction outside of the norm and we have a 10,000sq.ft building at Brown Hill that he is putting up for a call centre.

“He is doing it as I would say against the odds and this is his first experience with a large project and he has stunned the rest of Nevis with the time, [and] efficiency and we are expecting the delivery of the project on schedule or ahead of schedule and I think I have to give him a special note of commendation for that…he has been thinking outside of the box. He is normally a joiner but he can move to construction,” he said.

Mr. Daniel used the opportunity to urge other youths of Nevis to take advantage of the opportunities available to transform from workers to business owners.

In the case of Mr. Hendrickson and Mr. Stapleton, the Youth Minister said they would continue to receive support from the NIA to ensure that their business remained viable.

However, he predicted a bright future for the awardees with new developments expected to commence on Nevis. He encouraged them to challenge established institutions which provided furniture to furnish homes, businesses and planned new developments like the Aman Hotel and the Cosmetic Hospital.

The Minister also and reminded the awardees that they should make themselves available to show the rest of the world their capabilities.

Mr. Daniel also spoke to the importance of partnerships which often times was referred to in Nevis as a leaky ship

“Here we have Curt and Morris working together with Superior Interior and I want them to continue to do this to point in a new direction in Nevis where many of the businesses in Nevis are sole traders and so if anything happens to the one person the business cannot go ahead.

“Morris is a joiner, Curtis is a joiner and each of them can deliver the products but Curtis is the business fella [fellow], Curt is the entrepreneur, Curt is the man who spots the deal, Curt is the fella who says lets go forward let’s make  this deal and so that blend is very, very important,” he said.

The Youth Minister noted that the work of both Hendrickson and Stapleton could be seen in many of the recently constructed affordable homes at Cherry Gardens and urged the public to support the young entrepreneurs.

He was hopeful that they would be able to penetrate the export markets since they produced the quality of work required for competition at the regional and international level.