Regulator at the Nevis Financial Services Regulation and Supervision Department Ms. Lyndis Wattley
NIA CHARLESTOWN NEVIS (April 11, 2013) — The effectiveness of the Federation’s anti-money laundering infrastructure to successfully prevent criminals or would-be criminals from abusing the systems, was heavily dependent on the knowledge and understanding of anti-money laundering and other relevant laws and established mechanisms in place to ensure that financial institutions were not used to disguise the source of illicit funds.

That view was expressed by Regulator of the Nevis Financial Services Regulation and Supervision Department Ms. Lyndis Wattley. She was at the time delivering welcome remarks at the start of a two-day seminar and training workshop hosted by the Department on April 11, 2013, at the Occasions Conference Centre at Pinneys.

“The adherence to these law is central to the Federation’s continued strategy to develop and maintain a reputable and viable financial services industry but the effectiveness of our anti-money laundering infrastructure in successfully preventing criminals or potential criminals from abusing our system, depends heavily on our knowledge and understanding of such laws and our ability to identify those threats,” she said.

Ms. Wattley explained that there was now a higher standard which compelled regulated entities to know the laws, to adhere to them and for the Supervisory Body to be given the independence necessary to mete out punishment enshrined in the laws, if regulated entities were found in breach of those laws.

Notwithstanding, the Regulator said while serious effort was made by a vast number of financial institutions to adhere to and comply with all relevant laws and regulations which governed their licence, there were institutions which persistently scoffed at the requirements and adherence to the laws.

Ms. Wattley said support for her Department was critical if it was to fulfil its mandate.

“Consideration must therefore be given to the degree of punitive measures the Department must be allowed to exercise such as the supervision or revocation of licences for failure to comply, as well as instituting stricter standards in issuing licences,” she said.

However, she quickly added that granting that authority should not be without the necessary training which would ensure that due care was given in the execution of the mandate.

“These actions would equip the Department with the tools that it needs to also engage in the accountability and vigilance that is required of the financial institutions we supervise.

“It is imperative to note, however, that the levying of sanctions and the suspending or revocating licences are not an active pursuit of the Department. Rather a strong partnership between regulated entities and the Financial Services Regulation and Supervision Department is preferred. 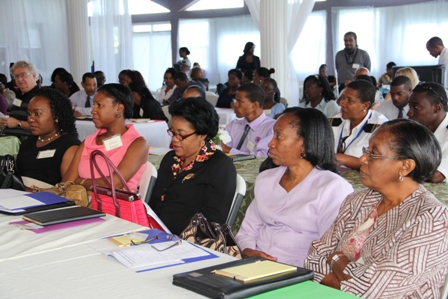 “That partnership that we seek to strengthen is demonstrated by this inaugural training workshop. We recognise that training is costly and may be a burden on smaller entities to bear the cost of travel and accommodations etc., in sending an employee abroad. Therefore this exercise is structured to ensure that the required knowledge is received right here,” she said.

According to Ms. Wattley, it was the Departments vision that the training workshop became an annual event and that persons would take up the challenge which would result in the ultimate fostering of more specialised professionals in Nevis.

She said it was an avenue that could lead to self employment and attract more businesses to Nevis. The Regulator also expressed hope that the size of Nevis did not serve to inhibit the quality of service and ability to engage in best practices, in the performance of the Department’s responsibilities.