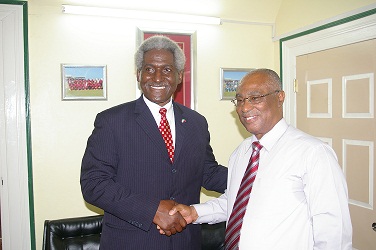 His Excellency Palmer, who was on his first official visit to the Federation of St. Kitts and Nevis since taking up his new posting, earlier presented his credentials to the Governor General, Sir Dr. Cuthbert Sebastian.

In responding to the sentiments, Premier Parry told Palmer that Nevis and the United States have had strong historical ties, and he reminded the Ambassador that the first U.S Secretary to the Treasury was Nevis-born Alexander Hamilton, who later settled in the U.S where he became an outstanding statesman.

The Premier also informed the Ambassador that the relationship between the U.S and Nevis has gotten stronger over the years, particularly as a large number of Nevisians have settled on the US mainland, and Americans here on Nevis.

Mr. Palmer underscored the need to strengthen these bonds.

Premier Parry and Ambassador Palmer also discussed the benefits of implementing geothermal energy on Nevis, the ongoing global economic crisis and its impact on the region and the U.S, among other matters of mutual interest.