NIA CHARLESTOWN NEVIS (April 24, 2013) —Premier of Nevis Hon. Vance Amory described a courtesy visit by Venezuelan Ambassador to St. Kitts and Nevis His Excellency Romolo Camilo Henriquez Gonzalez on April 23, 2013, as one in which they held interesting and cordial discussions regarding the Federation’s relationship with Venezuela.

Mr. Amory told the Department of Information,at the end of the visit, that based on their discussions, he believed that Nevis would benefit from the relationship forged between Venezuela and St. Kitts and Nevis.

“I think the exchange indicates that we can have an ongoing relationship and we will look at areas such as training and in areas maybe like agriculture which will be conducted by their technicians in Venezuela and I think it’s is going to be a good period of cooperation between Venezuela and St. Kitts and Nevis and I am expecting that Nevis would benefit from that as well… 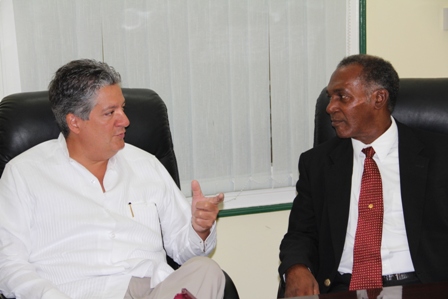 “It is instructive that he has reiterated the willingness of his country, through himself as Ambassador here, to carry on the good relations which existed between St. Kitts and Nevis and Venezuela,” he said.

The Premier added that he also used the opportunity to extend condolences on behalf of the people of Nevis on the recent passing of President Hugo Chavez and congratulated new President Nicolas Maduro who was sworn into office in Venezuela on April 19, 2013.

The Venezuelan Ambassador who was accompanied by his wife and an interpreteralso paid a courtesy call on Deputy Governor General His Honour Mr. Eustace John and Leader of the Federal Opposition Hon. Mark Brantley. 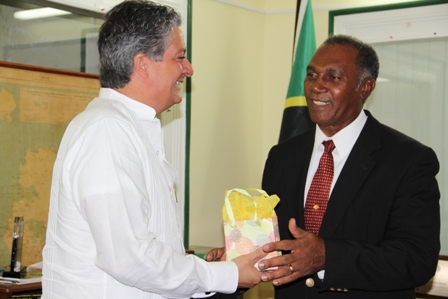