Newly installed hold baggage x-ray machine at the Vance W. Amory International Airport.
NIA-CHARLESTOWN, NEVIS (May 10TH, 2011) — Nevis’ Vance W. Amory International Airport is now equipped with a state of the art hold baggage x-ray machine. The US$50,000 machine was installed, in the presence of General Manager of the Nevis Air and Sea Ports Authority [NASPA] Mr. Spencer Hanley and NASPA’s Chief Security Officer [CSO] Mr. David Hendrickson.
The new machine, with its “powerful detection capability, reliability and image quality” was installed by Auto Clear representative Mr. Barry Luppowitz who also facilitated training for the airport’s customs officers.
“What you have here is what New York City airports have, nothing different,” Mr. Luppowitz said in an interview last week [May 4] where he expounded on his company’s work throughout the United States.
“You have the same as any very large airport. I live in Atlanta, Georgia, the busiest airport in the world, [and] you have what they have except they have more quantities obviously,” he added.
The hold baggage x-ray machine, according to Mr. Luppowitz, “is the latest scanner for cargo and baggage for airlines.”
“It’s a large machine so we could put very large boxes or packages through. It would detect and notify you of bombs, explosives, guns, knives, narcotics and maybe fruits,” he added.
In explaining the significance of the newly installed baggage machine, CSO Hendrickson said it “would enhance the security division at the airport” and would be placed in the hold baggage area.
“When I say hold baggage, it means the baggage that would be checked and stowed away in the aircraft [and] that the passengers would not have access to. 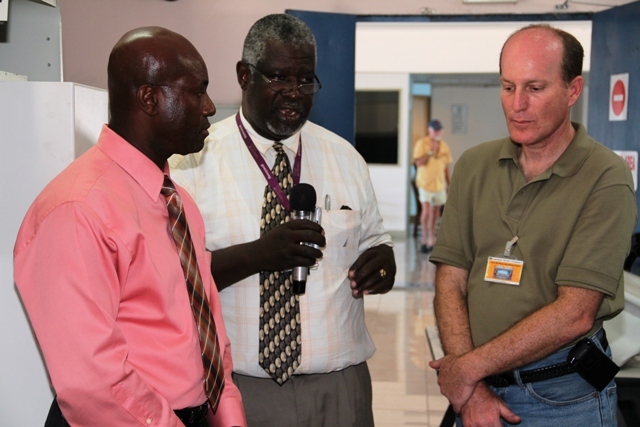 General Manager of the Nevis Air and Sea Ports Authority [NASPA] Mr. Spencer Hanley, Chief Security Officer of the Nevis Air and Sea Ports Authority [NASPA] Mr. David Hendrickson and Auto Clear Representative Mr. Barry Luppowitz.
“It is important for us to do so because two years ago, it was mandatory, from ICAO [International Civil Aviation Organisation], that all baggage flying an aircraft must be screened, 100 percent must be screened. So, as a result of that, we had to get this new machine to do that job for us,” he explained.
GM Hanley used the opportunity to record his appreciation, on behalf of NASPA, to Mr. Luppowitz and his company, Auto Clear, and to the Nevis Island Administration, particularly Nevis’ Premier and Finance Minister the Honourable Joseph Parry who offered financial assistance to NASPA. 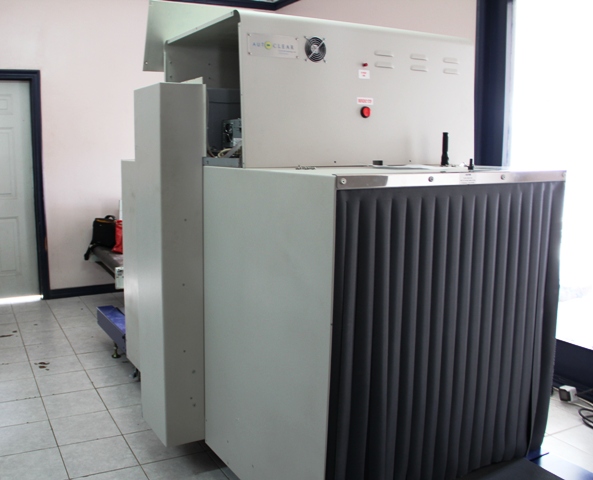