Charlestown, Nevis- (Friday, September 23rd, 2011) WINAIR Airline officials and Premier of Nevis, the Hon. Joseph Parry celebrated 50 years of safe and dependable service to the North Eastern Caribbean on Wednesday, at a reception at the Oualie Beach Hotel.

“Your safety record has been outstanding, with a record of 100 percent.  I might get to my destination a little late but I am just pleased to get there,” said the Premier.

Over the years, WINAIR has been challenged in many ways including, high fuel prices and an increase in operational costs. 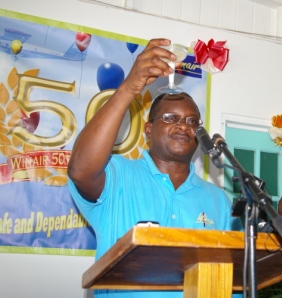 “We have been in the middle of a recession and we do not know when it will be over but although the airline is having financial challenges, I hope someday, the airline can make an arrangement with customers to get lower prices but until the airline can fly on water or fresh air, we will have to make the best of it,” said the Hon. Joseph Parry.

He added that on behalf of the people of Nevis he looked forward to a continued good relationship with WINAIR.

Meanwhile, WINAIR’s Managing Director, Mr. Edwin Hodge gave a brief history of the airline and stated that ir was established in 1961 by Mr. Georges Greaux, Mr. Faustin Ledee and Mr. Chester Watley with the aim of connecting the islands of St. Martin, St. Barths, St. Eustaius, St. Kitts, Antigua and for the last 33 years, Nevis. 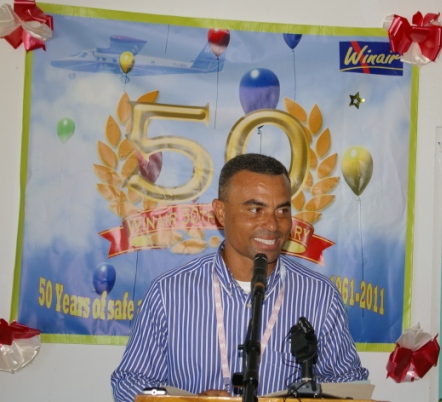 He noted that though the flights to Nevis at present had to be scaled back for economic reasons, the airline would continue its service to that destination.

“We have limited flights in and out of Nevis due to economic reasons but let it be known that we (WINAIR) promise to service the island for a great continued partnership,” said Mr. Hodge.

He further noted that the landing facility in Nevis had grown from a small building with only daylight flights available, to an airport building with much potential. 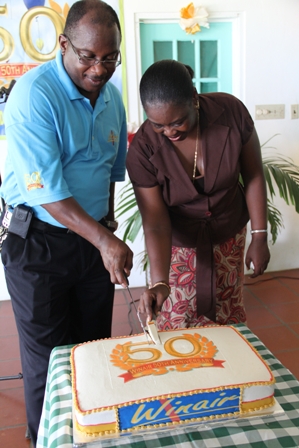 The anniversary celebration was chaired by TDC Director, Mr. Ernie France who kept the occasion high spirited as a number of Hoteliers, WINAIR pilots and staff, Nevis Airport officials, local and regional media personnel and other invited guests were on hand to witness the affair.