Assistant Secretary in the Ministry of Social Development Michelle Liburd
NIA CHARLESTOWN NEVIS (March 06, 2014) — A symposium tailored for women on Nevis took center stage on March 05, 2014. The Department of Social Development Gender Affairs Division on Nevis hosted the event at the St. Paul’s Anglican Church Hall on under the theme ‘Inspiring Change Celebrating women; Transforming Lives.”
Assistant Secretary in the Ministry of Social Development Michelle Liburd in remarks delivered on behalf of Junior Minister Hon. Hazel Brandy-Williams at the opening ceremony, called on women to band together since as a unified body they could herald change where inequality was concerned.
“Change is inevitable and inequality among sexes must become a thing of the past if society is to reach its full potential. The change that must continue to be inspired by women would be geared towards the full acceptance of women as equals…
“Feminists have inspired change and whether we agree with their philosophy, we have benefited and now ‘we like it so’, therefore, we need to become inspirers and agitators for change. Women can transform lives especially if we are in leadership positions but we can still input from whatever position we find ourselves. We must band ourselves together as some of you have done… with one of the major objectives being to push the women’s agenda for change that would result in gender equality,”  she said.
At the symposium which formed part of activities leading up to the observance of International Women’s Day 2014 on March 08, Liburd also noted that the issue of gender equality was also of benefit to men.
She pointed to a top official of the United Nations whom she said stated the evidence was clear that equality for women meant progress for all. Countries with more gender equality saw better economic growth. Companies with more women leaders performed better. Peace agreements that included women were more durable and parliaments with more women enacted more legislation on key social issues among them health, education, anti-discrimination and child support.
“The call is clear, women must support each other in our quest for equal rights, human rights, for progress. All hands on deck. The task has begun and we must continue to fight the good fight,” she said.
Notwithstanding, Liburd contended that there was cause for some celebration since despite the odds, women had been able to nudge the load called inequality and in Nevis and by extension the Caribbean they could boast of serious strides made in the effort to push inequality aside. 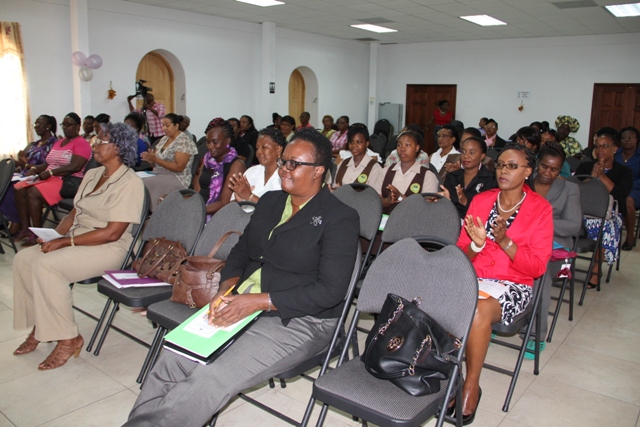 “Hence we can celebrate many of our own. I am sure that all of you who are gathered here in this forum feel confident about your achievements as a woman, even if it is only a small step such as earning an income and using it as you see fit.
“It may seem small to some of us who have gone further, such as reaching to the highest pinnacles of education available…so we celebrate our achievements and declare them from the rooftops and sound the alarm that we are pushing forward to continue the journey we have started,” she said.
The forum took the form of a panel discussion on the topic “Women’s Societal Roles and Responsibilities: Are we fulfilling our failing at our social obligations?” with panelists Garcia Hendrickson, Patricia Claxton, Andrea Bussue and Kimone Moving and moderator Ivorcia Browne, an interactive session with Dr. Jessica Badarles on the topic “Inspiring Change Through Self-Care” and group discussions on the way forward.