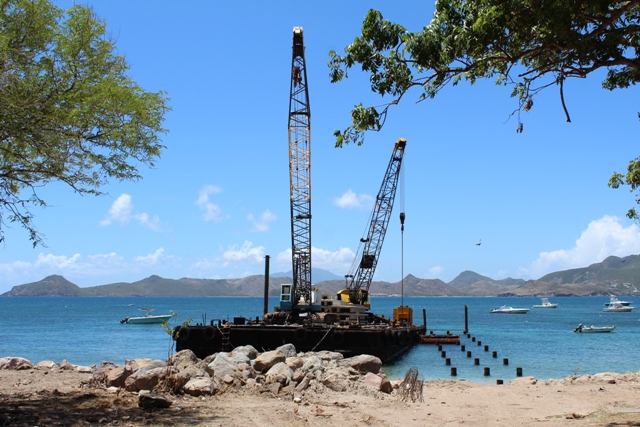 Work on the new state-of-the-art water taxi pier at Oualie Bay on August 23, 2018, with the barge and 200ft of piles planted offshore for the 300ft facility

NIA CHARLESTOWN NEVIS (August 27, 2018) — Construction work on the 300ft water taxi pier at Oualie Bay has resumed. Hon. Alexis Jeffers, Deputy Premier of Nevis and Area Representative for the St. James Parish who heads the project, says due to a delay the completion date, based on the rate of construction, is expected by October 2018.

Mr. Jeffers said in an update while touring the project on August 22, 2018, the contractor, Secure Marine Construction from St. Maarten, had to suspend work because of the delay effectively pushing back the initial completion date slated for August 2018.

“The delays would have affected the timeline we would have given in the past, in terms of, complete construction within a six week period. We have had delays of almost about a month so it means that we are behind with this project but most of the difficulties that we have had have been ironed out…

“I am happy to report that we would be more than likely completed with this particular project either by late September or early October and that would give us a chance to do many more things in order to get this site ready,” he said.

Since resumption of the project, piles have been planted of shore spanning a length of 200ft with another 100 feet left to go. The pier is designed with a “T” shape at the end. Steel casings are being constructed on site. Slabs and pile caps are prefabricated in St. Maarten and brought to Nevis. A retaining wall has also been constructed on shore, adjacent to the shoreline.

Mr. Jeffers noted that the facility would provide convenient access into and out of Nevis. He said the Nevis Island Administration (NIA) is ensuring that the necessary infrastructure is in place for the island’s continued development and for the benefit of the people of Nevis.

On completion, the new state-of-the-art water taxi facility which will fall under the jurisdiction of the Nevis Air and Sea Ports Authority, will have a reception area and parking to provide patrons with an easier point of access and exit when utilising the pier.

Mr. Jeffers says it will facilitate the thriving water taxi service operating in the area which has been utilising a nearby privately owned pier which is at present in a state of disrepair.

“If we were to welcome persons into Nevis and when they are exiting Nevis, we want them to do so in a safe manner and also in a manner that is consistent with the services that we want to offer here on the island of Nevis,” he said.

Work on the $6 million project began in June 2018. It is being financed by the Sugar Industry Diversification Foundation (SIDF). Its source of funds are derived from

the St. Kitts and Nevis Citizenship by Investment Programme.