Minister of Cooperatives in the Nevis Island Administration Hon. Robelto Hector speaking at the launch of the New River Farmers Development Cooperative Society Limited, at the Department of Agriculture’s conference room in Prospect

NIA-CHARLESTOWN NEVIS (October 21, 2011) — Minister of Cooperatives on Nevis Hon. Robelto Hector, called on members of the newest Cooperative Society formed on the island to work together with a collective premise of ownership and investment.

The Minister was at the time delivering remarks at a ceremony to launch the New River Farmers Development Cooperative Society Ltd. at the Department of Agriculture’s conference room in Prospect on Wednesday October 19th.

“It is my hope that we can encourage ourselves to continue to work together. The theme among you should be one of ownership, one of investment. We have recognised in recent times that agriculture imputs have spiked and therefore are affecting the prices of the outputs.

“Members, I see this as a golden opportunity for you to increase your lots in agricultural production. Too many times we tend to ask ourselves what is it the group is doing for us? I would want to encourage members to ask what thay can do for the group for their benefit,” he said.

He reminded them also of the role cooperatives now played given the world wide recession. According to Mr. Hector, those that operated like banks were assisting and time and time again it had been said how much a part they were playing in the stabilising process.

The Minister urged the members, therefore, to think internationally with regard to the contribution they could make as a cooperative.

Mr. Hector, who is also the Minister responsible for Agriculture, disclosed that in the next year he was hopeful that an advisory body would be formed in agriculture. 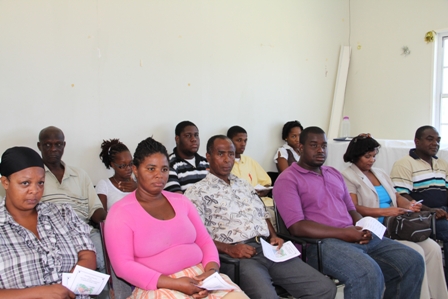 “I would inform you that early next year, it is my hope that we would form an Agricultural Advisory Council so that we can work closely in making sure that the programmes the Department [of Agriculture] is carrying forward can indeed better assist the development of this country…

“So cooperative members, this is your business. It is an opportunity for you to band yourselves together to make sure that you make your contribution in the field of agriculture,” he said.

Meantime, the Minsiter commended members of the Cooperative Division for their hard work in keeping with the Nevis Island Administration’s policy to ensure that cooperatives continued to be groups of individuas through which the development among farmers was encouraged.

He also commended the New River Farmers for what he described as a rebirth citing that it was an important step in the growth of the group of now 20 farmers.

“Two years ago, I remember having a meeting with this group and seeing the desire. I am happy today we can actually enter that formal part of registration as a cooperative.

“We are all aware that cooperatives have been the backbone for development and as far back as human beings began developing themselves for mutual benefits, cooperatives were with us,” he said and added that the African Country of Uganda boasted of 10,000 cooperatives groups. However, since his tenure as Minister in July 2006, Nevis could boast of the formation of four.