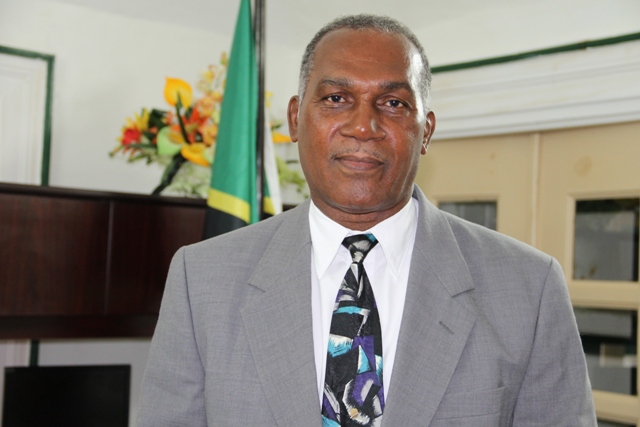 NIA CHARLESTOWN NEVIS (May, 08, 2014) — The following is the full text of an address by Premier of Nevis and Minister of Finance in the Nevis Island Administration Hon. Vance Amory on May 08, 2014, on the findings of the Treasury Fire Investigation.

The Treasury Building in Charlestown which housed the Inland Revenue Department, Treasury, Value Added Tax (VAT) and IT Departments was destroyed by an early morning fire on January 17t, 2014.

My fellow citizens, my fellow Nevisians and residents of Nevis,

As you are all aware, in the early morning hours of Friday 17th January, 2014, our island was dealt a terrible blow when the building housing our Inland Revenue, [Value Added Tax] VAT, Treasury and [Information Technology] IT Departments was destroyed by fire.

The importance of that building and the departments to this government that the Treasury Building housed cannot be overstated. This fire caused massive dislocation of government workers and great disruption of the services that the Administration provides to you, our citizens and residents. Indeed, for some time, the entire ability of the Administration to collect revenue and pay its bills was impaired.

The cause of this tragic fire was, therefore, a matter of grave concern to your Administration and we set about immediately seeking assistance from the Federal Government to investigate the cause of the fire. The Federal Government exercises authority within the Federation for the Fire Services, and ultimately for the Police Services and we, as the Administration, sought to engage them at the earliest possible opportunity, to seek assistance for a thorough independent investigation into this matter.

Your [Concerned Citizens Movement] CCM Administration’s early intervention with the Prime Minister of the Federal Government, on the very morning of the fire, resulted in a visit to the island and to the site of the fire by the Honourable Prime Minister one week later on the 24th of January, 2014.

Later the following week after the 24th, the Federal Government, through the insistence of the Prime Minister, provided some assistance with furniture and equipment to the Administration to begin the relocation of these various critical departments which had suffered severe loss.

I wish to record my Administration’s thanks for this gesture by the Federal Government and to the [Sugar Industry Diversification Foundation] SIDF for a contribution of $100,000 which was used to purchase some of the equipment which was lost.

However, on the matter of an investigation into the cause of this fire, there seemed to be no urgency exhibited whatsoever, despite the repeated efforts of your Administration to secure a commitment from the Federal Government to thoroughly investigate this matter.

On the 10th of February, 2014, more than three weeks after the fire, I wrote to the Honourable Prime Minister urging him to act and to ensure that an independent expert undertook an investigation.

Finally, on or about the 14th day of February, 2014, exactly four weeks after the fire, some investigators were secured, through the Federal Government and the Commissioner of Police, to come into Nevis, to undertake the requested investigation into the cause of the fire of the 17th of January 2014.

Those investigators spent a brief period in Nevis. Their preliminary report suggested that the cause of the fire was uncertain. They however, offered to undertake a more thorough investigation but indicated a cost of between US $70,000 and US$100,000 would be necessary to have such an investigation conducted. 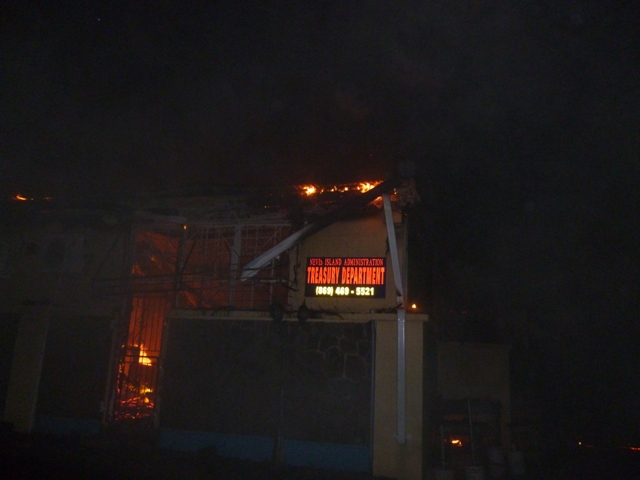 As the Premier of Nevis, I saw it was essential that the people of Nevis be informed as to what caused the fire. A matter of such national importance could not be simply dismissed or swept under the rug and fellow citizens, you would recall that we had had a spate of fires which destroyed the building of the Venezuela Embassy in St. Kitts and which damaged some aspects of the [Organization of American States] OAS offices in St. Kitts and that there had been also two other fires which damaged private properties in St. Kitts just before this happened and it was, therefore, cause of great concern for us.

I, however, delayed in engaging the services of this retired fire chief as I had every confidence, that the Federal Government would shoulder that responsibility of investigating this matter fully. That confidence, as it turned out, was misplaced.

It is against this backdrop that your Administration eventually asked retired Fire Chief and fire investigator Robert T. Riches to assist the people of Nevis, by undertaking a thorough investigation of the cause of this tragic fire of the 17th of January, 2014.

Chief Riches was accompanied by his wife Dr. Judi Riches. Together they visited Nevis over the period 13th to the 20th of March, 2014 and undertook their investigation. It is important to note that retired Fire Chief Riches has had 35 years service with the Toronto Fire Department, which is the largest fire department in Canada and the eighth largest in North America and that he was responsible for the control and command of all fire scenes in his jurisdiction, during his tenure as fire chief.

He has investigated thousands of arson fires and he is recognised as an expert witness in court and is a consultant to major corporations and governments. His wife Dr. Judi Riches is a forensic psychologist and criminologist.

I give that description of their qualifications just to ensure that, we the people of Nevis and anyone who hears this report, recognises that the persons whom we asked to assist us were in fact highly qualified, reputable and that they would do a professional job of doing the investigation.

Having undertaken a thorough investigation into this fire which caused so much damage to the Administration and the people of Nevis, Chief Riches presented a 13-page report to the Cabinet of the Nevis Island Administration on the 20th of March, setting out his findings and also his recommendations.

The report by this expert investigator is troubling. After much debate within the Cabinet and your Administration, the decision was taken that it was a matter of national importance that the full forensic fire investigation report be published and made available to all the citizens and residents of our island. 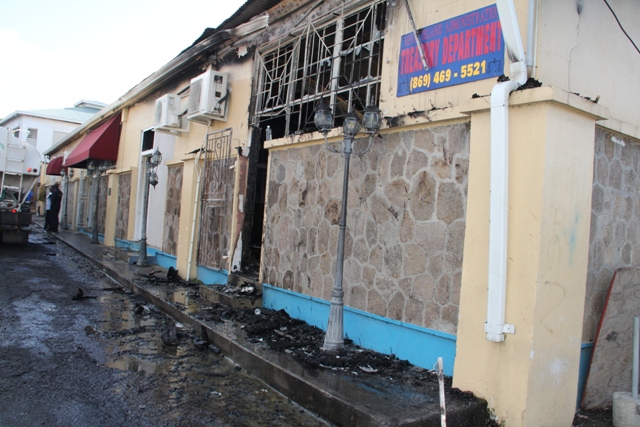 I, in fact, will send a copy of the report which we got from Chief Riches to [Assistant Commissioner of Police] ACP Robert Liburd who is the officer in charge here in Nevis of the Police Services.

The report which we received from Chief Riches states in part on Page 1 under the caption “Brief Introduction of the Findings” that “Using National Fire Protection Association standards, the reconstruction and analysis of the fire scene revealed that arson was clearly the cause of the fire at the Finance Complex on January 17th, 2014.

“Two incendiary devices were used. The devices were petroleum based. These devices entered the structure through a maintenance opening on the west side of the building. Both devices landed on the false ceiling. One device landed towards the southwest corner of the Treasury office, the second landed approximately three feet from the front door on the north side of the Treasury office. The devices ignited thus starting the fire.”

At Page 5 of the report under the caption “Bottom Line”, the experts seem to conclude, that the destruction of the Treasury Building was as a result of a vicious arson attack. They went on to state, “The resulting fire gutted the Treasury and VAT offices and the Inland Revenue Department sustained considerable damage. Fortunately, no lives were lost.

“After completing this comprehensive forensic fire re-construction and analysis, it is the opinion of the investigators that this was not a random act of mischief but rather a well-developed and orchestrated plan of mayhem. We are of the opinion that a well thought out plan of attack was made at the heart of the government and people of Nevis” and that quote is from the report which the investigators gave to us and which I shall submit to the Police.

My fellow citizens and residents, these findings speak for themselves. I wish to use this address to appeal to our people to set aside any divisive and dangerous track upon which we have embarked. Whoever orchestrated this criminal assault, launched an attack not only on this Administration but also on the workers in these departments, the persons who could not receive their pensions and other subsistence, the business community who could not transact business with the Administration.

This was an attack on all the people of Nevis and I think I made that very clear on the morning after the fire.

I have given instructions that the forensic report be passed to the Police in Nevis, in the fervent hope that the perpetrators of this heinous crime against the government and people of Nevis, can be caught and brought to justice.

I call on all the people not to engage in any finger pointing and speculation but rather to assist the Police with actionable information, so that we can bring that person or those persons involved to justice.

I ask you, my fellow citizens, to join with me in strengthening our collective resolve that there shall be no retreat and no surrender, to those who seek to destabilize and divide our country through criminality.

Your Administration has been dealt some vicious blows in the past 15 months since taking office but while we have been knocked down, we have not been knocked out. Our commitment to serve all the people of Nevis remains undiminished and undaunted. 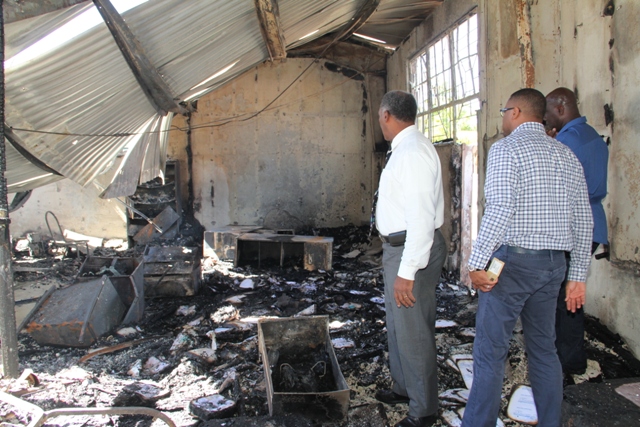 We shall not tire in working in the best interest of the people of Nevis and giving you this synopsis of the report from the investigators Fire Chief Riches, retired Chief of Fire in the Toronto District in Canada, and his wife Dr. Judi Riches, is part of our effort to let you know that we would do everything possible and necessary to provide transparency in government or where there is any action which takes place, which affects the people of this country.

We shall give our full support to the Police and seek whatever assistance we can get to do investigation.

I want to thank you for listening to me and may God continue to bless us and may He also give us protection against any evil, any further hurt, that we may continue to grow in peace and harmony in our country. Thank you and God bless us all.