His observation came on Monday at the Cotton Ginnery Station in New River where a second container load of 7,370 pounds of cotton lint was being prepared for shipment to Japan.

“I think it [cotton] is viable. Last year we had US$100,000 coming in and this year’s [crop] will bring in another US$70,000 and we are hoping that once we get the next crop in for this season that it will be a viable crop.

The Agriculture Director said it was a proud moment for him and staff at the Department of Agriculture who were involved in the production of last’ year’s crop that they were able to make a shipment in spite of the many challenges.

“There are 15 bales of cotton totalling 7,370 pounds of lint cotton no seeds just pure lint. This took about 60 acres unfortunately because over the past three years – this is three years crops that we have put together – we had problems with the Pink Ball Worm, land preparation and too much rain in one instance,’ he said.

In 2006 Minister of Agriculture in the Nevis Island Administration (NIA) Hon. Robelto Hector had presented a new thrust to reintroduce cotton cultivation and production for the export market and Mr. Amory said that project had gone well 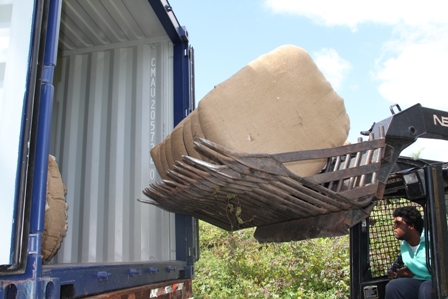 According to Mr. Amory, the Japanese Government through one of its assistance programmes, had provided a grant for the installation of an irrigation system at Indian Castle because of the extremely dry conditions that usually existed there.

However, since the completion of the project last year, ironically, the rains came and began to hamper land preparations. He noted that there had been another dry spell since and they were engaged in land preparations in an effort to plant between 37-40 acres of cotton this year.

With regard to the quality of the crop on Nevis, Mr. Amory said it remained a world class product.

“It still is the best in the world because it is a long staple crop and that is the reason why the Japanese are buying it sight unseen. We plant basically and they buy. The crop is already guaranteed so once we plant cotton they will buy the cotton because it is such a good crop,” he said while he urged more private farmers to grow cotton. 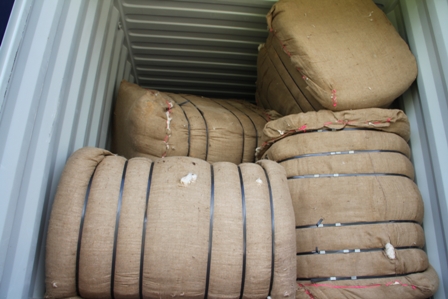 “I encourage other farmers to get involved in cotton production. I think it is good use of lands that are not being utilised right now and you are sure of some returns from it because we will buy the cotton from you once it’s produced.”

The Director also used the opportunity to commend the Agriculture Officer responsible for the success of the cotton crop.

“Our Cotton Officer Mr. Ruben Vyphuis, he is the one who is responsible for all what you see is happening here. He is the one who has the headache to make sure land preparation is done on time, seeds planted, the crop is kept clean and the ginning process.

“So Mr. Vyphuis I could say kudos to him for once again seeing another shipment off to Japan,” he said.

Meantime, Mr. Vyphus who was also present noted that the cotton lint came from private farmers and government owned farms. He said they had begun planting cotton which they hoped to complete in the coming weeks.

We are hoping that next year you will be back here to see a 40 foot container moving out of Nevis. Normally it takes two to three years to get a shipment out of Nevis.

“Now things are on stream we are working hard and it looks like things are looking up this year.

“As I normally do I try to encourage everybody to plant cotton. There is a sure market once you plant cotton we buy it so there is no spoilage, no loss so cotton is the way we should go,” he said.