Deputy Gov. General, His Honour Mr.Eustace John
Charlestown, Nevis (September 12, 2011) – Deputy Governor General, His Excellency Eustace John, on Monday, outlined the NRP Administration’s next five-year term in office. The Deputy Governor General delivered the Throne Speech to mark the opening of the legislative body since its dissolution in June and the commencement of the new five-year term of the NRP Administration.

Following the swearing in of the members of the Government Bench and the election of a new President of the law-making body, Deputy Governor General John inspected a Guard of Honour before delivering the one-hour Throne Speech.

“We have assembled here today (Monday) to begin the first session of the Assembly since the local elections in July of this year. The Nevis Reformation Party (NRP) was returned to office after a hard fought election in which it obtained the popular vote and won the majority of seats. The people of Nevis must be commended for the trust and confidence reposed in the NRP- led government to continue to lead them in these challenging times.”

His Excellency Eustace John made a clarion call for solidarity. “We are one people committed to common goals and aspirations. Let us put our differences aside and continue to work together for the economic and social advancement of all Nevisians. We must also continue to demonstrate the spirit of caring and sharing, being our brother’s keeper, as we weather the turbulent storm of economic recession. Please rest assured that this government will continue to be inclusive, engaging and equitable as we progress the people empowerment agenda. We will also represent the interest of all Nevisians and residents regardless of race, social status or political viewpoint.” 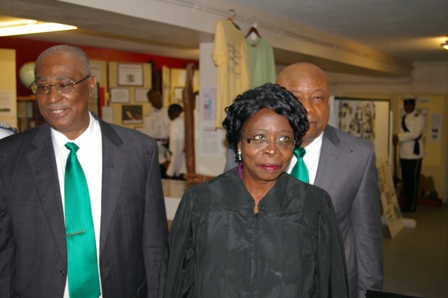 The first order of business of the new term of the NRP Administration, according to the Deputy Governor General, “must be fiscal stability”. He said, “The cost of servicing the debt accumulated over the past 20 years is stifling growth and thus the need to return to fiscal balance is axiomatic.

As a result of the global financial and economic crisis, it was necessary to increase the debt and run budget deficits especially over the past three years. This is not unique to Nevis. Governments worldwide have been forced to undertake similar fiscal expansion to mitigate the effects of the crisis. Consequently, the stock of debt has increased to $359 million as at June 30, 2011. Similarly, the costs associated with servicing the debt has increased. As Nevisians, we come from a history of financial conservatism, and have been known to live within our means. There is no doubt that we expect our government to do the same.

Consequently, Nevis, along with the Federal Government, has embarked on a fiscal and macroeconomic stabilization programme in collaboration with the International Monetary Fund through its Stand-By–Arrangement to restore fiscal balance and place the debt on a downward trajectory. We have already implemented a number of revenue reform measures, the most significant being the Value Added Tax (VAT). In the future, we will concentrate on expenditure reduction and debt management.

Our strategy is very clear and will include the following measures:
• Begin immediately to wind down the stimulus programme.
• Exercise greater control over current expenditure which would result in a moderate reduction in the size of the public sector and the freezing of wages.
• Reduce the annual capital expenditure budget to a realistic and affordable level while maintaining and pursuing critical projects that generate growth and create jobs.
• Strengthen the monitoring and evaluation of budgets to eliminate waste, and focus expenditure on priority areas.
• Rationalize expenditure on goods and services, transfer payments and overhead costs.
• Initiate a review of administrative functions to improve efficiency and eliminate duplication.
• Conduct audits in all departments to ensure value for money and the achievement of planned outputs.
• Access training in debt management for Treasury and Ministry of finance staff.
• Establish fiscal and debt targets for the government consistent with the ECCB guidelines.
• Develop a comprehensive debt strategy to guide the borrowing of the government. The objective will be to meet debt obligations in a timely manner and finance projects at the least possible cost.
• Utilize the Regional Government Securities Market to access cheaper financing for government’s projects and operations.
These measures will require some sacrifice by all of us in the short and medium term, but are necessary to build the foundation for a strong and resilient economy in the future. We have insisted in our discussions with the IMF, the need to maintain the safety net programmes as well as transfer payments to health and education to protect the most vulnerable in the society. It was agreed that these programmes will be maintained at existing levels during the implementation of the fiscal adjustment programme. We are optimistic that by the ending of 2013 the fiscal situation would have improved significantly.” 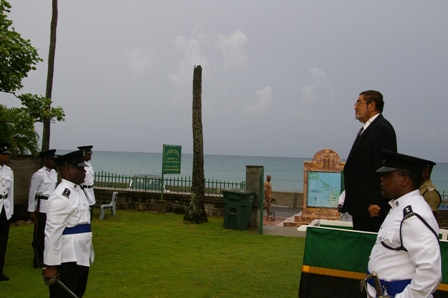 The full Throne Speech is available on www.nia.gov.kn.