He made the disclosure on December 14th, 2011 when he gave a report at the Alexandra Hospital’s pre-Christmas Programme at the health facility’s front lawn.

Mr. Claxton explained that the Nevis Island Administration (NIA) had been working on modernising the Radiology Department with a computerised system.

“So far we have acquired a Computer Radiography Unit which is Mammography-ready and presently, we are installing a picture archiving and communication system PACS which is capable of archiving diagnostic medical images of X-rays and Ultrasounds.

“On completion we will be capable of electronically transferring medical images to radiologists, cardiologists and other special consultants overseas for diagnosis and consultation. The images can also be transferred locally to our doctor’s office using a secured internet line. This therefore, would result in better quality producing, protecting, processing and archiving radiologic images and information to patients,” he said.

In addition he said there were other significant improvements and pointed to the Laboratory Department which he said continued to provide efficient and dependable services to customers. There was also the addition of trained staff.

“Of late Ms. Altisha Stevens has been appointed as Lab Phlebotomist after completing her certification course.

“We have also secured a Micro Reader and Washer to start processing some special tests including the Thyroid Function Tests and Prostate Specific Antigens (PSA). Validation has already begun with a view to introducing these tests next year,” he said.

According to Mr. Claxton, the Medical Records Department’s statistics showed an increase in the number of persons who utilised the services of the Alexandra Hospital for 2011, an indication of growing public confidence in the Health facility and that persons were taking a keener interest in their health. 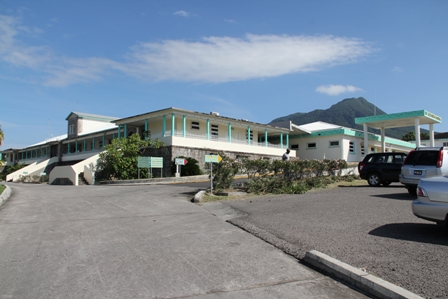 With regard to revenue collected for services at the Hospital, Mr. Claxton revealed there was also an increase recorded.

Meantime, Mr. Claxton thanked the staff of the institution for a job well done in the past year and mentioned the staff additions and those who parted ways with the Alexandra Hospital in 2011.

Ms. Muriel Thompson returned to the Administrative Department while Ms. Condor Hanley of the Administration Department and Ms. Martha Augustus of the Pharmacy Department left.
However, despite the successes of the Health Facility, Mr. Claxton said it was not without its share of challenges but wished the staff and their family a blessed Christmas season.

“The challenge for this institution is to build a feeling of oneness, of dependence on one another because the question is usually not how well the person works but how well they work together.

“I would like to take this opportunity to thank the entire staff for a job well done may the Christmas season be filled with joy for you and your family and a bright and prosperous 2012 to all,” he said.