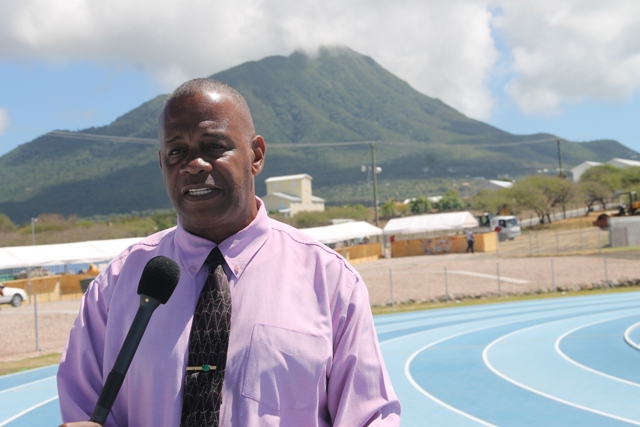 Hon Eric Evelyn, Minister of Youth and Sports in the Nevis Island Administration at the Mondo Track at Long Point on March 27, 2018

The event is set to begin from midday at the International Association of Athletics Federation (IAAF)-certified facility with the opening ceremony and match pass. The games will follow with a total of 54 races in which more than 100 primary school athletes are expected to participate.

Hon. Eric Evelyn, Minister of Youth and Sports in the Nevis Island Administration (NIA) told the Department of Information, hours before the event on March 27, 2018, that the Administration will ensure the child-friendly athletic event, leaves a memorable and lasting impression on patrons.

“Let us come out and support them in our overwhelming numbers and we are hoping that all in all the inter-primary meet to be hosted here for the first time will go off with a bang. First impressions count and the Nevis Island Administration will ensure that we have a good first impression tomorrow,” he said.

The Minister noted that the venue is in a state of readiness and only the finishing touches were taking place.

“At the athlete’s area, the tents are already up. In terms of the seating area, we are on some final touches … part of the seating area will be covered… In terms of parking, the two parking lots are huge and can practically hold all of the vehicles on the island of Nevis. On the inside of the facility, we have adequate parking for officials and VIP…

“The tent which will separate the spectators from direct contact with the athletes, the fencing is already done. The gates for the fenced area is already completed and we already have the stage up for the official opening ceremony,” he said.

Mr. Evelyn stated that patrons could expect a prompt start of the ceremony at midday with the expectation that it will end 1 ½ hours later and a keenly contested historic athletic meet.

He also said patrons should also expect heightened security and a smother flow on entering the sports venue.

“When you get to the gates there are two ticket booths that will speed up the process of you getting into the facility.

“Of course, you have to remember as well that there will be security checks at the gates and we are asking you please, to be on your very best behaviour once you come to the facility,” he said.