Associate Professor in the Department of Sociology and Anthropology of North Carolina University Dr. Scott Fitzpatrick

CHARLESTOWN NEVIS (July 23, 2010) — Associate Professor in the Department of Sociology and Anthropology of North Carolina University Dr. Scott Fitzpatrick described the excavation site of a Pre Columbian Amerindian settlement at Coconut Walk, as one which held untold stories of Nevis’ history.

The Professor made the disclosure in an interview on Thursday when the Department of Information visited the site under investigation by his team of 30 including at least 22 students for the past three weeks. The site is located near the only surviving lime kiln on the island and is being conducted in collaboration with the Nevis Historical and Conservation Society.

“Although archaeologists have been coming to Nevis for over 30 years or more, in terms of pre Colombian material there has not been a whole lot of excavation on Nevis. We know where most of the sites are but the excavations have been sort of limited so we wanted to get what we call a deep time perspective, going deep and seeing what’s happening over time.

“That also ties in with the short history of Nevis that people got here 4 or 5,000 years ago, as evidenced by some other sites that are in Nevis. What happen during colonial times [and] what happen after, during the historic period and so all of it is sort of trying to answer the questions about the landscape and the use of the island by people who have lived on Nevis for thousands of years,” he said. 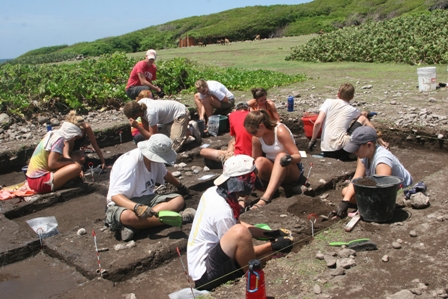 Dr. Fitzpatrick explained that much work had been done on the island in the past 30 years by other archaeologist on historic aspects but there was the need to link the new findings with what had already been discovered which would provide a shared landscape perspective.

The important Amerindian site according to him dated back 1300-1400 years and represented a large settlement. He noted that the abundance of pieces of pottery and shells on the surface of the area was a good indication that things were buried there that would tell how the people then lived, ate and about their basic lifestyle.

He said their interests to excavate on Nevis were fuelled by the availability of information compiled by a television show in the 1990s called The Time Team who had spent a week on Nevis working.

“What we did is we went and looked at their maps and what they had done and we decided to work adjacent to some of those areas…This is an excellent place to work at and Coconut Walk is just a really spectacular place to answer a lot of questions we have about what people were doing in Nevis over 1000 years ago and in this part of the Caribbean,” he said.

In response to whether there had been any findings up to the time of our visit Dr. Fitzpatrick said it was though it was a little early to speak on their findings thus far much of the objects they had collected were taken to a lab they had set up and the process to clean the items was time consuming. 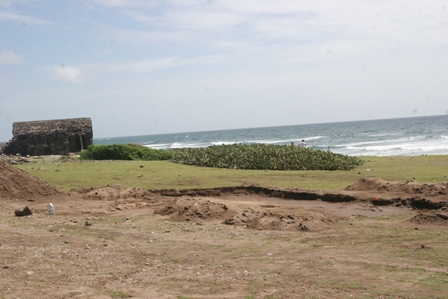 Site of a wooden structure thought to be an Amerindian home

He noted that although some of the objects were clearly identified, some of the material would have to be taken back to the University for radiocarbon dating. All their findings would be turned over to the Society for display at the Museum of Nevis history in Charlestown.

“We found some very nice artefact some shell tools that give us an idea of the wood working making canoes or growing crops, some beautiful jewellery, some beads made out of stone so that gives us a little bit of an idea of what people were doing in terms of daily life and ritualistic activities and things like that which mesh up with a lot of what other people do in the Caribbean,” he said.

The first leg of the project will be concluded on August 4th but excavation work will continue to the end of July Dr. Fitzpatrick indicated. Most of the 30 students are expected to head back to the United States in the first week of August. He said the team hoped to return every two years if not every year in the future, dependent on its progress. 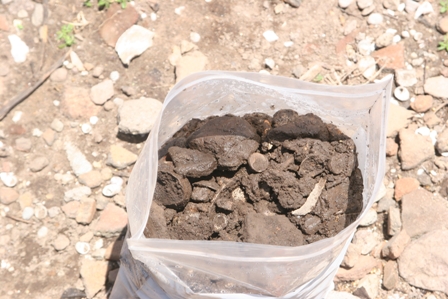