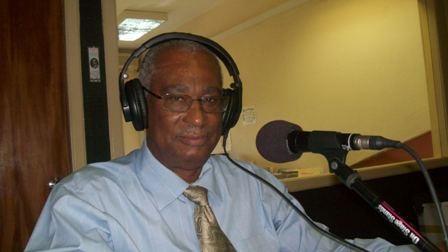 Premier of Nevis, Hon. Joseph Parry
Charlestown, Nevis (Wednesday, March 21, 2012) — First to third formers in all secondary schools on Nevis will receive their personal laptop computers shortly, Premier and Minister of Education, the Hon. Joseph Parry announced on his weekly In Touch with the Premier radio programme aired live on Choice FM 105.3 FM on Tuesday, March 20.

He said the computers which marked the final phase of the One-to-One laptop programme instituted by the Federal Government will arrive on Nevis on Thursday, March 22.

“On my recent visit to schools, the Charlestown Secondary School and the Gingerland Secondary School, students from the third form and the second form especially,  have come up to me and asked me ‘when are we getting the computers?’,” stated the Premier.

“I am pleased to say that Thursday morning, the computers will be coming to Nevis and the third formers, the second formers, and the first formers will have their computers at last. And that will complete the round of distribution of computers.”

Students at the Lyn Jeffers, a private secondary school, will also receive laptops.

Students from the third to fifth forms in the three secondary schools on Nevis, and the Sixth Form College, were issued with laptop computers last year. Those who were in the second form last year are now in the third form, and will receive their computers. With that distribution, all secondary school students in Nevis will be the proud owners of their personal computers which they will keep when they leave school.

Now that the current generation of high school students has computers provided by the government in collaboration with the government of the Republic of China on Taiwan, Premier Parry said he was hopeful that the other generations would also get computers, though not necessarily from the government. He pointed out that it would be helpful if parents could get their children accustomed to computers in primary schools.

“Each school has a lab, so all these school children can operate computers,” said the Premier.

Turning to another subject related to the information age, Premier Parry addressed the matter of the national broadcasting service ZIZ TV.

Premier Parry noted that a lot of people had asked him why they could not view the station in Nevis. He said he had good news for viewers on both sides of the Narrows, saying that ZIZ TV is currently being shown on Nevis, and added that plans were afoot to have Nevis Television (NTV), Channel 8 shown on St. Kitts.

“I am informed that ZIZ TV is being tested right now on Channel 77 on Nevis Cable, so those who wish to see ZIZ TV can tune in to Channel 77, and when the testing period is over, it will be part of the basic package I understand, and it will be on Channel 6,” reported the Premier.

While persons living on Nevis were previously able to view ZIZ TV on Cable TV, persons on St. Kitts have never had the opportunity to see what the Nevis Television, operated by the Department of Information and aired on Channel 8 on Nevis Cable, has to offer. This will change when engineers at the Cable TV in St. Kitts obtain a piece of equipment that is required to facilitate the transmission.