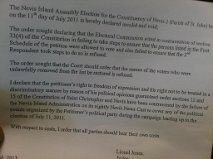 The decision of Judge Lionel Jones
In the Charlestown High Court of Monday, Justice Jones chose to read out his orders.

1.  The Nevis Island Election Assembly Election for the Constituency of Nevis Number Two, Parish of St. John’s held on the 1th Day of July 2011 is hereby declared null and void.

2.  The Order sought declaring that the Electoral Commission acted in contravention of Section 33, Subsection 4 of the Constitution in failing to take steps to ensure that the persons listed in the first schedule of the petition were allowed to vote, and also failed to ensure that the second respondent took steps to do so, is refused.

3.  The Order sought that the court should order that the names of the voters who were unlawfully removed from the list be restored, is refused.

4.  I declare that the petitioner’s right to freedom of expression and his right not to be treated in a discriminatory manner by reason of his political opinion guaranteed under sections 12 and 15 of the Constitution of St. Christopher and Nevis, have been contravened by the failure of the Nevis Island Administration on its nightly Nevis newscast to cover any of the political events organized by the petitioner’s political party during the campaign leading to the election of July 11, 2011.

5.  In respect to costs, I order that all parties should bear their own costs.”