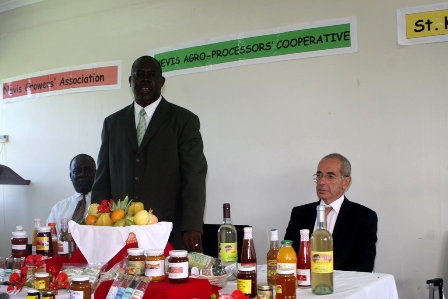 Mr. Hector thanked the Ambassador for the Canadian Governments continued assistance to Nevis, through the Canadian International Development Agency (CIDA). He noted that at least 90 percent of Caribbean students had received scholarships to pursue studies in agriculture and today the islands were benefiting
Some Farmer’s and Agro Processor’s produce and products on display at the meeting
from agriculture including Nevis.

The High Commissioner used the opportunity to congratulate the Cooperatives in their efforts on how far they had come and assured of the Canadian Government’s continued assistance.

“CIDA is going to continue to be a very active partner… The Prime Minister of Canada last year announced a doubling of the development assistance for the Caribbean Region, increasing the amount that we have put aside to help those in [need] from Can.$200 million to Can. $600million. So it’s a fairly concrete expression of our commitment to the Region,” he said.

The Canadian Official noted that although one of the big challenges faced by the producers was transportation of products to the market overseas, he said it was a major area that was under consideration.

Notwithstanding, Mr. Marshall urged the farmers to continue to produce superior quality products which were better than those found on shelves in the United States and Canada. 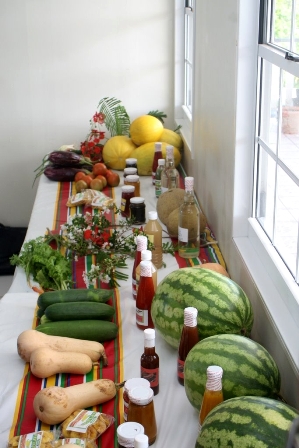 He also told the producers that they should focus on marketing and to identify a product that was high end, had specialty labeling and was attractive instead of having to compete over volume and size.

Mr. Marshall also reminded the producers of the importance of food sufficiency.

“Everybody is realising now that food sufficiency a very, very important issue. It is not sufficient simply to rely on tourism and then buy everything else. It is important to have a balance to protect your economy and your future as well. So that I think you will find increasing emphasis on agriculture,” he said.

The meeting was also attended by other senior Agriculture Officials on Nevis and was chaired by Coordinator of the Inter-American Institute for Cooperation on Agriculture (IICA) St. Kitts and Nevis Mr. Augustine Merchant.