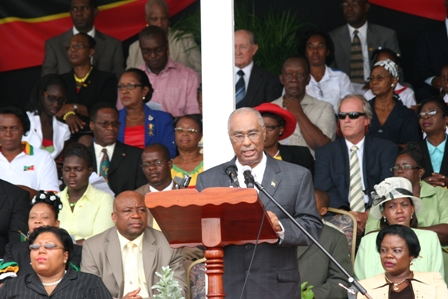 Premier of Nevis, the Hon. Joseph Parry urged his country’s young people to resist the desire to delve into bad behaviour, which could undo the hard work of the good contributions of their predecessors. He made the comment during the ceremonial Independence Day Parade at Grove Park on September 19, 2008, to mark the 25th Anniversary of Independence of St. Kitts and Nevis.

“I ask that the young people get rid of the guns.  Maybe we should ask Police to have an observed gun amnesty because crime does not pay and Badness is outta style,” he said. 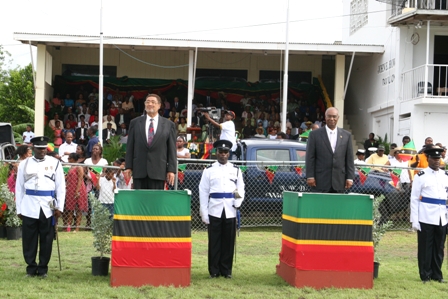 Premier Parry (r) takes the salute with Deputy Governor General Mr. Eustace John (l). They are flanked by senior Police officers at the Parade
During the ceremony, 25 persons were also recognised for their contributions to the island of Nevis.

Under cloudy skies and a persistent drizzle, Premier Parry and Deputy Governor His Honour Eustace John inspected colourful contingents from the island’s Secondary and Primary schools, the Cadet Corps, the St. Kitts-Nevis Police Force, the Boys and Girls Brigade, the Pathfinders and the Nevis Boys Choral Group among others.

The Music for the Silver Jubilee Ceremony was provided by the Nevis Symphonic Band and the Brown Hill Seventh Day Adventist Drum Corps.