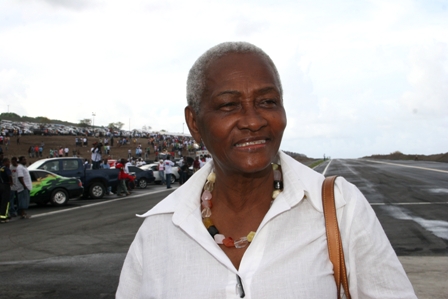 United States of America Councilwoman Mrs. Una Clarke during the inaugural drag races at New River on Nevis
Former United States Councilwoman Dr. the Hon. Una Clarke, welcomed the new the Drag Racing facility on Nevis and cited it would become a worldwide tourist attraction and create jobs. She made the comment at the inaugural races on September 19, 2008, when she spoke with the Department of Information.
Mrs. Clarke who was on the island as a guest of the Nevis Island Administration (NIA) for the Federation’s 25th anniversary of Independence celebrations, said she would not have missed the opportunity to experience the races first hand.

“This attraction will bring people from all over the world who are interested in drag race or any other kind of race. It’s a tourist attraction and it will over the years create jobs, bring new visitors and that is what we want to do is to be able to be a showpiece,” she said.

Mrs. Clarke described the race track as a beautiful one which would grow from strength to strength. She also congratulated those with the vision to make the track a reality.

“I think it will become a national attraction…In every nation everybody tries to do something unique… and so whether its horse racing, whether its car racing, it comes a part of a national identity.

It is a competitive business and all racing is competitive…It will be something that will bring young people to aspire to want to do something that’s is useful and helpful to the nation and so I am sure that it will be regulated in a way where people will understand the nature of drag racing and what it means,” she said.

According to Mrs. Clarke, she was instrumental in getting the United States and England to give a five year extension to the nations of the Caribbean to allow them to find new ways to retool their economies. The Drag Racing facility she said provided that opportunity for Nevis.

The former Councilwoman also noted that she was impressed with the people of Nevis and the growth and development of Nevis and St. Kitts, which she contributed to.

She added that as the first Caribbean American elected to Congress and as a Jamaican, she has used her face and voice to speak for the entire Caribbean as she understood the aspirations of all the people of the Caribbean.

Ms. Clarke referred to Nevis as a diamond in the crown of Caribbean nations and each island should feel that they were specifically and uniquely positioned to be different but to be one people, who understood a common destiny and a common future.

Mrs. Clarke is the mother of Congresswoman Yvette D. Clarke