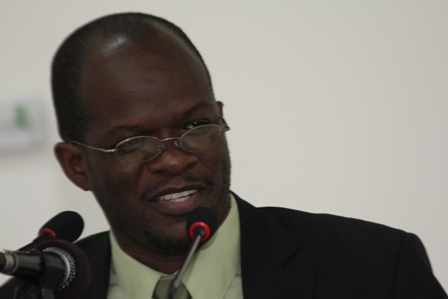 Constituency Representative in the Federal Parliament, Attorney General and Minister of Legal Affairs Hon. Patrice Nisbett delivering remarks at the official opening of the Combermere Community Centre
NIA-CHARLESTOWN NEVIS (February 02, 2012) — The Nevis Island Administration (NIA) and Minister responsible for Social Development Hon. Hensley Daniel, were highly commended for their commitment to the Community Centre Programme on Nevis and for sticking to their  promise of a new Community Centre in the Combermere area.

The praise was showered by Constituency Representative in the Federal Parliament, Attorney General and Minister of Legal Affairs Hon. Patrice Nisbett, when he delivered remarks at the official opening of the new Centre on Tuesday January 31, 2012. The modern facility will also serve residents in the outlying communities of Camps, Liburd Hill, Scarborough, Barnaby, Potworks, Mount Lilly Road and Rawlins Pasture.

“This facility symbolises the Administration’s contribution to the process of national building and its commitment to ensuring that the environment we engender for the people of Nevis is a just, inclusive and more cohesive society that works for all. In so doing we seek to strengthen our people’s capacity for participation in community development and by extension nation building 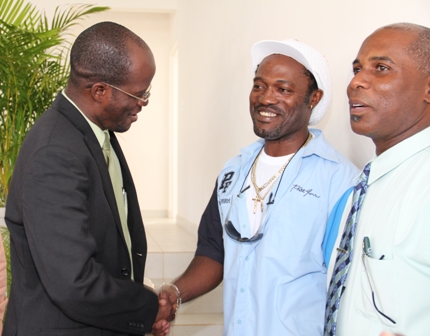 Mr. Nisbett said the Administration had invested in the modern facility to enhance the social resilience of the people in that area given the continued and constant attack on the social fabric of Nevis.

He said the resources that were expended on the community centre like others across Nevis provided tangible evidence that the Government was committed to ensuring sustainable development through the provision of opportunities and facilities that empowered  and developed people to become self reliant.

The community centre he said would represent countless opportunities which were available to the island’s youth and would assist in addressing many of the social ills in the society, as well as to bring a fair measure of pride to the people it would served.

Notwithstanding, Mr. Nisbett urged the area residents to make maximum use of the wide range of training , education and self-development activities that would be offered to them through the Ministry of Community Development.

He also encouraged them to promote activities and programmes which would inspire the youths to become more involved in community work, ensure they turned their backs on gangs, crime and anti-social behaviour and enable them especially those at risk to become productive, caring and responsible adults in an environment safe to grow and learn. 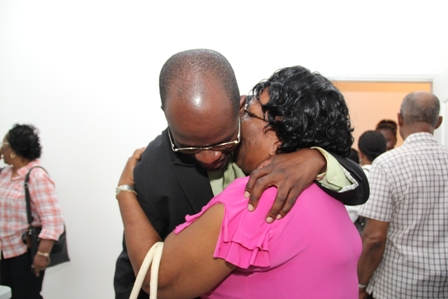 In that regard the Minister issued a number of challenges for his constituents that would set trends and make them an example.

“I challenge you my neighbours, as we celebrate today to utilise this building and all that it represents to the fullest. I challenge you to make the Combermere Community Centre a place of action, progress, growth. I challenge you to ensure that this centre is not just another attractive place to hold occasional concerts and quizzes.

The Constituency Representative used the occasion to underscore his support for his constituents and assured them of his part in ensuring that they received the assistance needed from government to bridge the gap between community and the Administration, in an effort to make the community and Nevis a better place.

Mr. Nisbett regarded the Official opening of the Centre as a significant occasion for the community of Combermere who he said had waited a long time for such a facility. He said they had a long rich history of its people’s involvement in community development which they had done over the years from their homes, yards, school and the Health Centre. 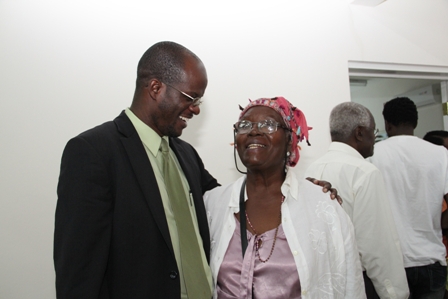 “Many knitting, crochet, cooking and sewing classes have been over the years conducted in the homes of the various instructors. Many community clubs and sporting organisations sprang up here in the community and their activities added value to communal life. All these things were done with there being no official home for organised and coordinated community activities,” he said.

Notwithstanding, the Minister reminded members of the community to reflect on the role played by the pioneers of the community who paved the way for the emergence of a modern and aesthetically appealing piece of architecture, which he believed would enhance the environment in Combermere.

He did not end before lauded the work quality of local contractor Mr. Livingston Mills who was also from the area. He said Mr. Mill’s workmanship was testimony to what could be produced by the people of the area once their talent was harnessed appropriately.