Health Planner in the Ministry of Health on Nevis Mrs. Nicole Slack Liburd
NIA-CHARLESTOWN NEVIS (February 03, 2012) — Nevis will join a number of organisations including the Pan American Health Organisation (PAHO) in the observance of World Cancer Day (WCD) on February 4th, 2012 under the theme “Together it is Possible”. Health Officials on the island have collaborated with a number of partners to engage in activities throughout February to encourage the prevention, detection, care and treatment of Cancer.

Health Planner in the Ministry of Health on Nevis Mrs. Nicole Slack Liburd told the Department of Information on February 3rd, that they had commenced the activities ahead of Saturday’s observance with cervical cancer screenings at the Gingerland Health Centre on February 2nd.

Cancer messages were held at schools on the island and the Pink Lily Foundation set up an informational table at the Memorial Square in Charlestown on February 03. Minister of Health Hon. Hensley Daniel also delivered a speech in observance of WCD.

“It has affected our population for quite a number of years and continues to do so. In 2011 right here in Nevis 27 persons were diagnosed with Cancer and in 2010, 25 and those numbers are alarming,” she said.

However, Mrs. Slack Liburd was of the view that the Ministry of Health’s proactive approach had helped to spur the public to take advantage of their status with the disease.

“With our screening initiatives, with the Pap smear screenings for example at the Health Centres and Prostate Cancer Screening at the [Alexandra] Hospital, we have been able to identify quite a number of our cases at the early stages. So although our numbers are increasing, we feel that it also has something to do with our prevention and our early detection initiatives,” she said.

The Health Official pointed to the many risk factors for Cancer and indicated that the Health Promotion Unit and all Health Departments on the island had engaged in the promotion of healthy lifestyles.

She noted that Nevis had quite a number of diabetic and hypertensive cases and those were diseases predisposed to Cancer.

“So cancer is here, it is in our population and we at the Ministry of Health are trying to get everyone on board to play their part in reducing Cancer here on Nevis hence the big promotion, the big campaign in 2012,” she said. 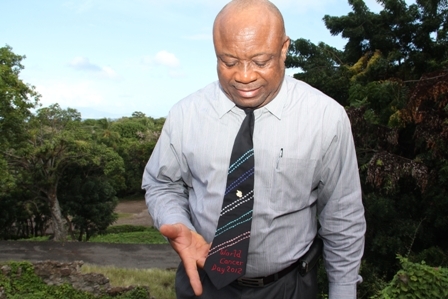 According to the Health Planner, it was the first time that Nevis was observing WCD with so many awareness activities in partnership with other organisations. She explained that this year’s theme was one of oneness and as such, everyone could contribute in whatever way possible to the fight against Cancer.

Mrs. Nicole Slack made mention of a presentation of five neck ties from the St. Pauls Anglican Church to members of the Nevis Island Administration Cabinet. She said she was certain the ties would generate some level of discussion as they were worn by the Ministers during the month of February as she explained what the colours on the tie denoted.

“The different colours on the tie representing the most prevalent cancers here on Nevis and those include prostate, breast, lung and cervical and there is also a purple colour there for the survivors of cancer and we do have quite a bit of survivors and they are supported by organisations such as Pink Lily. So to honour our survivors and the support organisations there is a purple colour on the neck tie,” she said.

Other activities in the Cancer awareness month include a Cancer based discussion  on  Choice Radio’s Good Old Days on February 4th, an Oncology Symposium at the St. Pauls Anglican Church Hall from 8:30-11am on February 8th and a Cancer based Church Service at the St. Pauls Anglican Church on February 12th. There will also be Health Tips read by Nurses on local radio stations and a number of Cancer Education sessions at all Health Centres.