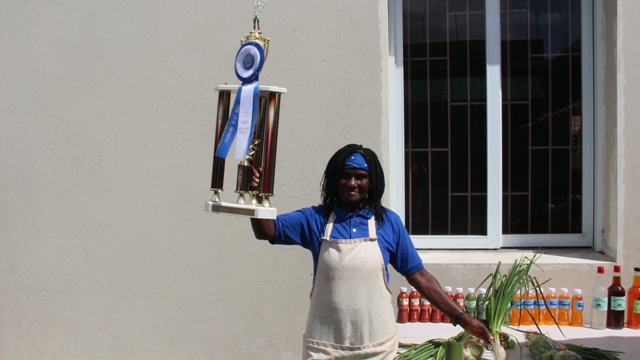 : Mrs. Emontine Thompson showing off her trophy and blue ribbon at her stall at the George Mowbray Hanley Market Complex in Charlestown, on February 24, 2020

NIA CHARLESTOWN NEVIS (February 24, 2020) — The Ministry of Agriculture on Nevis applauds Mrs. Emontine Thompson, a farmer of Brown Hill who walked away with 1st place in the Off-Island category, for her 11th consecutive win at the 49th Annual Agriculture and Food Fair (AgriFest) of the U.S. Virgin Islands. It was held in St. Croix from February 15-17, 2020.

Mr. Huey Sargeant, Permanent Secretary in the Ministry of Agriculture was responding to Mrs. Thompson and her husband William’s achievement at the agricultural exhibition when he spoke to the Department of Information on February 24, 2020. The couple represented Nevis at the exhibition which was themed “Trendy in 2020.”

“I offer her congratulations on behalf of the Minister and Ministry of Agriculture for her 11th consecutive win. What it says to us is that the island’s farmers have the capacity to grow not only abundantly but excellent quality agricultural produce.

“We encourage all farmers to emulate the success of Mr. and Mrs. Thompson and we encourage as well consistent production in order to feed our population,” he said.

Meantime, Mrs. Thompson who spoke to the department on February 21, 2020, noted that she entered the contest 13 times and won 11. She recalled when she first entered at the urging of Mr. Pearlievan Wilkin, former Permanent Secretary in the Ministry of Agriculture on Nevis, to showcase her products at the fair.

She said on her first try she did not win and attributed her loss to ignorance of the criteria. The second time she believes she was unfairly judged and her competitor won by 1/8 of a point. The third year she won the top prize and has never looked back.

Mrs. Thompson says she pays particular attention to the quality of her produce because she realises that if she wants to win, quality is key.

“While I am preparing for the agrifair in St. Croix I prepare myself. I make sure I have good quality food because it’s not any and anybody coming to judge. These people that they have judging is people who deal with agriculture itself, so they know the quality of the food.

“One of them told me one time ‘You are going to win again next year.’ I say why do you say that? Are you prophesying? She said ‘No, but you have good quality food.’ So then I recognised then that the quality of the food matters. I grow food all the time but for the competition, I must have quality food but if I don’t have it and I get it from somebody I let them know that I want top quality. It’s got to be quality otherwise I don’t want it,” she said.

Emontine, as she is affectionately known, says her farming involves long hours sometimes leaving home at 6 a.m. and returning home at 7 p.m., especially when the contest nears.

The award winning farmer who is also an agroprocessor says she also takes along her preserves to the contest.

“I do carry Sarsaparilla. I do carry essence. I do sugar cake in different colours, and these are things, when you do that, people look out for coming from the islands. And cassava bread, that again is another thing they really look out for,” she said.

She used the opportunity to thank all who continue to assist her including her husband, family members, supporters, friends and Mr. Sargeant.