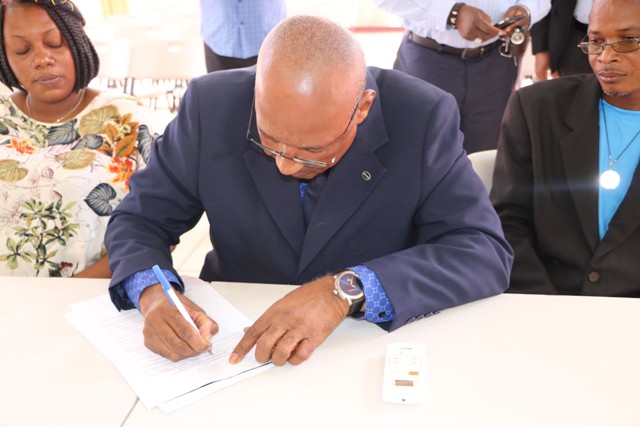 Mr. Keith “Dis an Dat” Scarborough, candidate for the Constituency Nevis 5, St. Thomas’ Parish by-election signs the Statutory Declaration of a Person Nominated as a Candidate for Election as a Member of the Nevis Island Assembly on Nomination Day, February 25, 2020, at the Cotton Ground Community Centre, before Mrs. Sherilla Nisbett, Returning Officer for the Electoral District 5. He is flanked by his nominators (l) Ms. Shoya Matthew of Jessups Village and (r) Mr. Denzil Webbe of Cotton Ground

NIA CHARLESTOWN NEVIS (February 25, 2020) — It is now official, Mr. Keith “Dis an Dat” Scarborough of Cotton Ground, a representative of the Concerned Citizens Movement (CCM), will vie for the position of Parliamentary Representative for District 5, St. Thomas’ Parish (Lowlands) in a by-election slated for March 05, 2020.

Moments after he was officially nominated by Ms. Shoya Matthew of Jessups Village and Mr. Denzil Webbe of Cotton Ground before Mrs. Sherilla Nisbett, the Returning Officer for the Electoral District of Nevis, 5, at the Cotton Ground Community Centre on Nomination Day, February 25, 2020, Mr. Scarborough gave the Department of Information some insight into his nomination.

“My thoughts are very positive and I believe with my nomination, it gives the good people of St. Thomas’ an opportunity to vote for someone who will go into government. Like I have said elsewhere, both of the candidates would want to see St. Thomas’ do well, grow from strength to strength, improving its development but the difference is that one would go into Opposition if successful and the other one go into government if successful.

“So it’s a simple choice that the people of St. Thomas’ really have and I am been feeling good. I have been doing the legwork through the community and the response has been positive thus far, and I’m hoping that come March 5th that we will very well see St. Thomas’ being represented in the Nevis Island Administration,” he said.

Nevis, 5 has been held by Hon. Joseph Parry, for several years. However, it was made vacant with his retirement from active politics at the end of 2019.

Hon. Mark Brantley, Premier of Nevis indicated in an address on February 14, 2020, that Mr. Parry had tendered his letter to the Nevis Island Assembly, signalling his retirement from the assembly and active politics with effect from December 31, 2019.