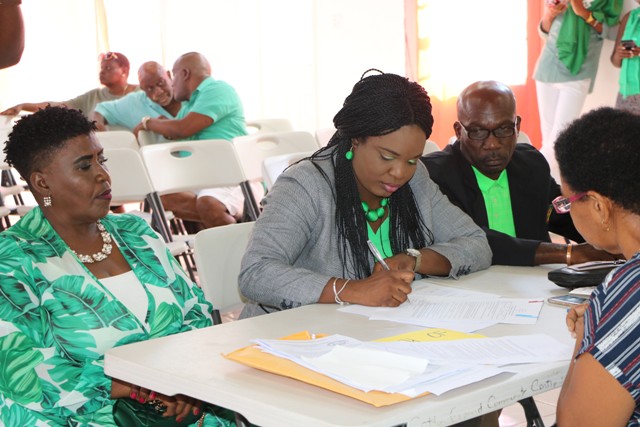 Mrs. Cleone Stapleton Simmonds candidate for the District 5, St. Thomas’ Parish by-election signs the Statutory Declaration of a Person Nominated as a Candidate for Election as a Member of the Nevis Island Assembly on Nomination Day, February 25, 2020, at the Cotton Ground Community Centre, before Mrs. Sherilla Nisbett, Returning Officer for the Electoral District 5. She is flanked by her nominators (l) Ms. Jenet Jennifer Jeffers; and (r) Mr. Collin Terrence Stapleton of Cotton Ground

NIA CHARLESTOWN NEVIS (February 25, 2020) — Mrs. Cleone Stapleton Simmonds of the Nevis Reformation Party (NRP) is the second candidate nominated to contest in a by-election on March 05, 2020, to fill a position left vacant by Hon. Joseph Parry the only opposition member in the Nevis Island Assembly at the time of his retirement from the assembly and from active politics on December 31, 2019.

“I think it is a very great accomplishment so it is a good feeling. As you know the whole mission, really, is to encourage more women to get involved in active politics,” she said.

Hon. Mark Brantley, Premier of Nevis indicated in an address on February 14, 2020, that Mr. Parry had tendered his letter to the Nevis Island Assembly, signalling his retirement from the parliament and active politics with effect from December 31, 2019.