CHARLESTOWN NEVIS (May 19, 2010) — Prominent Nevisian Businessman and landowner Mr. Ken Evelyn urged police stationed on Nevis in particular the outstations in the vicinity of his village Butlers to reach out to the community’s youth and forge partnerships that would reap mutual long-term benefits.

Mr. Evelyn’s encouragement came on Monday, at a ceremony in which he officially handed the keys for a brand new Police Residence at Butlers Village to Premier of Nevis Hon. Joseph Parry. The keys were subsequently handed over to the Police.

“I hope when the Policemen come here they have a good leader. This [building] is not just a home away from home. I want to know that they [police officers] go to the village at nights and meet with the youngsters, encourage them, get them down here to play games with them. By the way I am getting a pool table for them so they could play pool and encourage the youngsters down and play pool with them…

“Mix with the youngsters, get to know them… mix with them and they will become your friends and they will be able to give you information and this is the whole idea of it. So I hope this [facility] is not just to come and sleep but mix with them…It is helpful to get them to do that because when we grew up here we had the police with us and we were not afraid of things at all. This is the main thing about having them here,” he said. 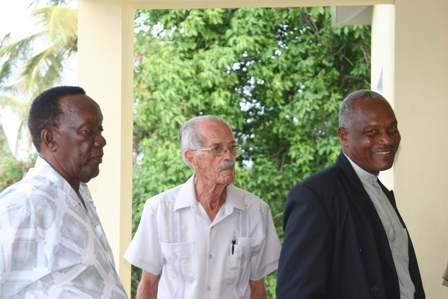 According to Mr. Evelyn who was raised in the village, in times past there was no sense of fear in the community and everyone roamed the village at time of day or night, all was peaceful. He also reflected on the community spirit and the importance of the police who would visit the village on horseback all the way from Newcastle to interact with the youths in the area but times had changed.

He said the project was conceptualised when his brother, another noted businessman in Charlestown, Mr. Arthur Evelyn were reminiscing and reflected on their peaceful childhoods in Butlers.

“One night Arthur and myself were talking and we said how things have changed in Butlers from those days when our parents had provided us with such a safe community. Today it’s changed completely…

“So we decided to try and go back to community policing, if we could try to get back in Butlers starting it here and we decided since we were born here and grew up here why not donate a small piece of land to the government and ask them to put down the first home from home for the policemen so we can have them back in the community,” he said.

The idea took root when he discussed the idea with Premier Parry who he said was extremely pleased with the proposed project and gave his full support. 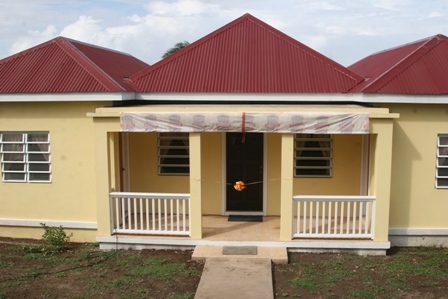 The new police barracks at Butlers Village before the name was unveiled by Premier Hon. Joseph Parry and Mr. Ken Evelyn and the ribbon cut by Former Assistant Police Commissioner Mr. Clayton Mills

“I must thank him for that very, very much. Without that support we would not be here today. He then handed it over to Mr. Laurie Lawrence our finance gentleman and again he was very, very helpful. He helped in all respects and gave me all the necessary encouragement I needed and I truly thank him for that.

“From thereon I had absolute cooperation with all the departments – Nevis Electricity Company Ltd., Planning and Public Works they all gave me full support in getting this building done. I have to thank all of them for doing that which made it much easier for me,” he said.

Mr. Evelyn who supervised the project thanked the contractors, electrician, and plumber who worked with him and also those who contributed to furnishing the home.

Notwithstanding, he did not miss opportunity to encourage members of the public to speak up and report incidents of crime to the police.

“What’s going to happen tomorrow when you walk in your house and your daughter or your grand daughter is lying there brutally raped or your son or grandson lying there with a bullet through his back paralysed for life? They say to you ‘Dad if you were not such a coward, if you were not such a chicken yesterday, I wouldn’t be lying here today like this but you were such a chicken, you were so selfish you only thought about yourself. You see something, you heard something but you are too scared to report it and because of that I am lying here today’. 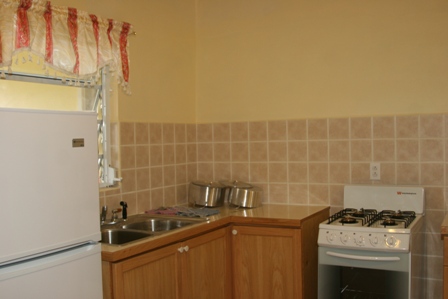 The kitchen area at the Police Residence – Butlers 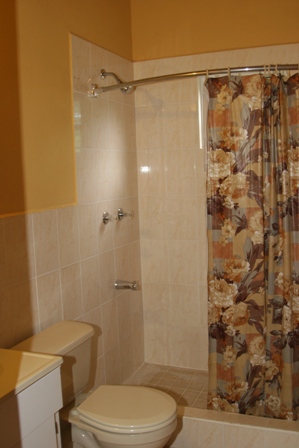 The washroom area at the Police Residence – Butlers