Developers, Thomas Williams (a national of St.Kitts), Mr. Andre Reid and Mr. Bill Powdar spoke to the audience on their intention of bringing a $400 million investment to Nevis which would create over 150 jobs during the construction phase, 100 permanent jobs on completion of the project, a polytechnic for training and bring revenue to the treasury of the Nevis Island Administration.

Following the presentations a number of pertinent questions were asked and suggestions made, including those pertaining to the environmental impact of the oil storage plant.

One resident asked if strong smells would come from the plant?

Mr. Reid answered, “no”, explaining that the top would be a floating roof which would leave very little room for smells to leave the tank.

Another question came from a national who resides in Canada and is visiting Nevis on vacation. He asked if the Nevis Island Administration would be a (insurance) benefactor in case of any hiccups? 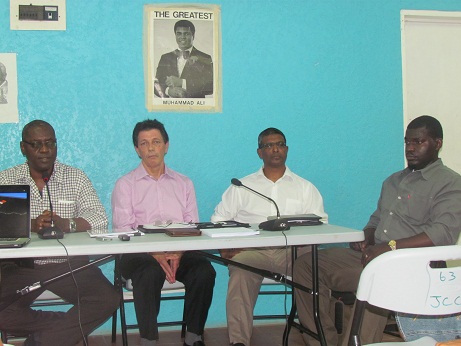 Mr. Thomas Williams said  that the insurance matter for Nevis, is a very good suggestion and would be followed up.

“Would there be a jetty on the property?”, another attendee asked.

Mr. Williams quickly answered “yes”. He also stated that CGI intended to be a good social partner, and said his company would be willing to give back to the island with other amenities for the residents of Nevis.

On the matter of safety, Mr. Powdar said, “All safety measures, all checks and balances would be put in place before any facility would be put on Nevis.”

The public consultation which started at 7pm went well beyond 9pm.