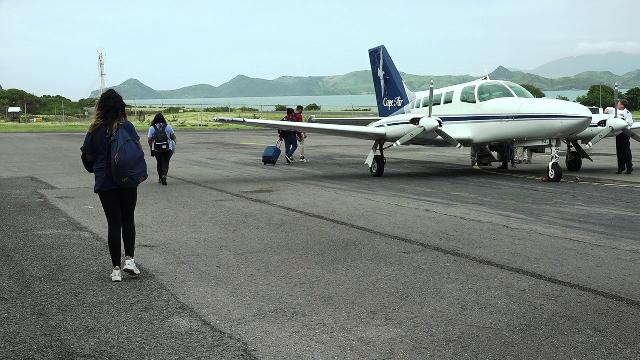 NIA CHARLESTOWN NEVIS (December 13, 2019) — Deputy Premier of Nevis Hon. Alexis Jeffers welcomed the return of Cape Air to the Vance W. Amory International Airport (VWAIA) at Newcastle, and urged Nevisians to utilise the service as the airline reinstated flights to Nevis on December 12, 2019.

Mr. Jeffers made the call at a welcoming ceremony hosted by Cape Air at the airport’s VIP lounge on the same day the airline returned.

“Today is a significant day. A joyous day as well too because Cape Air is once again flying in and out of the Vance W. Amory International Airport. Why I say it’s a joyous day is because Cape Air has been here in the past and you’ve had some success but I am certainly hoping this time around the success would be much more beneficial to you and the island of Nevis…

“My final appeal is for persons to use the service. Understand that you are being patriotic by doing so because you are supporting the island, and ultimately you are supporting a business that has certainly seen something in this island and has decided to come back and grow together on this island and develop as a result. So thank you very much and I wish the service well, and I hope that my words will fall on ears that will hear and do as I admonished. Use the service!” he said.

Mr. Jeffers pointed to two areas which he believes would likely bring visitors to the island who would use the airline.

“There is a cruise ship in the Charlestown harbour right now that has brought 1,200 cruise passengers to Nevis today. We are hoping that out of those 1,200 at least 1,000 might decide to come back, and once they decide to come back for a week vacation or 10-day vacation their airline of choice I am hoping would be Cape Air. So it means than Cape Air stands to benefit in that regard.

“Also we would have seen over the last six months the renovation work that was done at the Four Seasons Resort, quite significant of course, and indeed they have indicated this season is going to be one of their best ever. That would translate into passengers for you I am sure, because Cape Air has a significant network throughout the United States especially the eastern seaboard so to speak,” he said.

Mr, Jeffers who represented Hon. Mark Brantley, Premier of Nevis and the Federal Aviation Minister at the ceremony, believes that the airline would provide Nevis with the linkage it was seeking to have re-established with the Luis Muñoz Marin Airport in Puerto Rico.

The Deputy Premier noted that he is hopeful the airline’s association with major airlines in the United States would encourage passengers to use Cape Air.

“I am hoping with the connection or the relationship you have with other major carriers such as Jet Blue for example there would be some significant movement of passengers through your network connected to JetBlue and bringing passengers here as well,” he said.

The airline which had been previously operating in Nevis had suspended its service to the Vance W. Amory International Airport in 2015.

Meantime, Mr. Oral Brandy, General Manager of the Nevis Air and Sea Ports Authority (NASPA) welcomed the airline’s return and believes that the new relationship they have forged would be a long-term commitment.

“Recently I would have had constant conversations with the vice president of Cape Air, and having those conversations as well as some of the things that Cape Air would have done since they came to make preparations – things like training our security and maintenance staff in certain areas, installing equipment at the Vance W. Amory International Airport- I believe that they have long-term commitment in mind and so we do look forward to working with them,” he said.

The general manager used the opportunity to pledge NASPA’s commitment to the venture with Cape Air.

“We want to ensure that we provide the highest quality service that we can for visitors and locals alike. We have expended much funds right here at the Vance W. Amory in recent times to make sure we have a fresh look at the airport, and so we want to encourage people to use Cape Air and the links that they have to other destinations but also to use the Vance W. Amory International Airport,” he said.

“We suspended for a while but we are happy to return and service the Vance Amory airport once again and the beautiful destination of Nevis.

“Cape Air has been serving the Caribbean for more than 25 years now and Nevis is just a great fit to add to our roadmap and our operation down in the Caribbean. It’s an amazing, beautiful and unique destination and we hope to bring enhancement to the air traffic situation in Nevis by reinstating these flights and we hope to have a very long lasting relationship with the destination. We are so happy to be here,” she said.