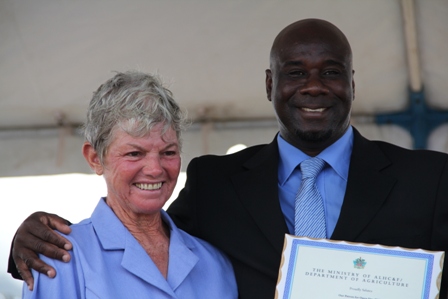 Minister of Agriculture on Nevis Hon. Alexis Jeffers presents an appreciation plaque on behalf of the Ministry and Department of Agriculture, to Patron of the 2013 Agriculture Open Day Mrs. Sandra David

NIA CHARLESTOWN NEVIS (March 21, 2013) — The Department of Agriculture on Nevis publicly acknowledged Mrs. Sandra David, a 30 year long livestock farmer, for her contribution to livestock farming on the island.

In a gesture to cement its appreciation, Minister of Agriculture Hon. Alexis Jeffers presented Mrs. David with a plaque, fruit basket and a floral arrangement at the opening ceremony for the 19th annual two-day Agriculture Open Day. The event was held at the Villa Grounds in Charlestown under her patronage.

Acting Permanent Secretary in the Ministry of Agriculture Mr. Eric Evelyn explained that Mrs. David had a very simple start to her career in livestock farming. 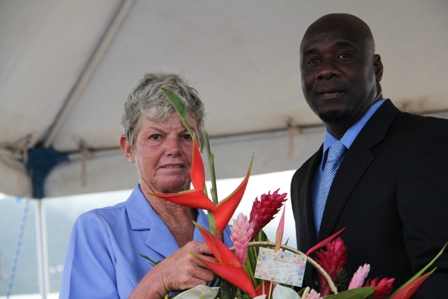 “Her husband bought her three animals, a sheep and two goats. She had travelled to Nevis from England with her family to take up residence here. From those three animals, Mrs. David persevered and flourished into one of Nevis’ most enterprising and committed livestock farmers. She is very serious where farming is concerned and it is safe to say that she is a business woman,” he said.

With the solid support of her family in particular her husband Cedric and son Stuart, her two grandsons and moral support from her daughter Becky she persevered over the years.

According to Mr. Evelyn, unlike many other farmers on Nevis, Mrs. David to this day continues to spend her entire day at her farm.

“She goes to the farm at 8 a.m. and remains there until sometime between 4-5.p.m. This of course, is not normal for any other farmer here on Nevis. Sandra is on the farm every day except on some Sundays.

“Her duties on the farm include providing water for the animals, most of which have to be drawn from a well. Providing concentrate feed, de-worming livestock and bottle-feeding young lambs and kids that are abandoned by their mothers,” he said. 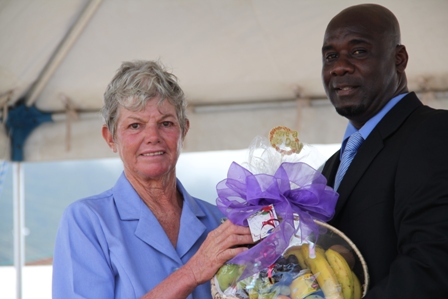 Mr. Evelyn contended that keeping livestock on Nevis was a major challenge and it had been no exception for Mrs. David and her family and spoke to some of the challenges she has had to deal with over the years.

“One of the major challenges she has faced over the years is that of dog attacks. She has lost numerous animals by dogs and she is hoping that this problem can be addressed in the near future. Another major problem she has faced is that of praedial larceny, and this to her is the most unfortunate and one that hurts the most,” he said.

The Acting Permanent Secretary lamented that according to Mrs. David, unscrupulous individuals had on many occasions destroyed her fence, broken into the pens and stolen her animals, some of them expectant mothers.

He added that Mrs. David also had to deal with unfavourable dry weather conditions which have been problematic for her farm, in particular when grass was scarce and money had to be spent on supplemental concentrate feed for her animals plus roaming donkeys competed with her animals for the feed on the pasture and water she provided for her sheep and goats.

Notwithstanding, Mrs David was quoted as saying that though keeping livestock was hard work, her love for the outdoors and for the animals in general kept her going all those years.

She acknowledged the “exceptional” technical support she continued to receive from the staff of the Livestock Division and was grateful. Also her relationship with the Department of Agriculture over the years had been one in which she was always willing to accept new ideas and suggestions and for several years she was part of a project in which she established a forage bank which provided feed for her animals.

Despite the challenges, Mr. Evelyn noted that Mrs. David had no regrets. 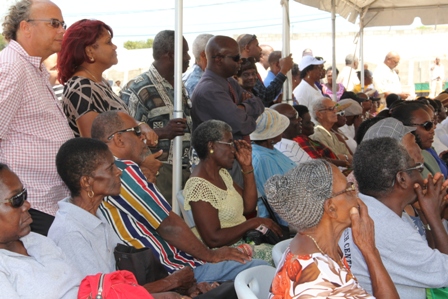 “Mrs. David said that she had thoroughly enjoyed her tenure in livestock farming and has absolutely no regrets. She indicated that despite the many challenges, she would have faced over the past 30 years, if she had to live her life over again she would still be a livestock farmer,” he said.

The Acting Agriculture Permanent Secretary used the opportunity to congratulate Mrs David on her selection as the Agriculture Open Day Patron for 2013 and should bask in the moment since it was a deserving honour.