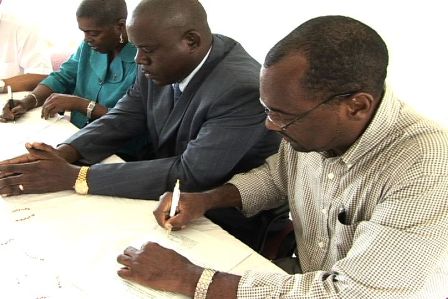 CHARLESTOWN NEVIS (August 19, 2010) — Minister responsible for Agriculture and Fisheries on Nevis Hon. Robelto Hector, viewed the signing of the minutes of consultations held during the preparatory survey for the Fisheries Centre Project in Charlestown, as an indication of the commitment and deepening relationship between the Federal Government and by extension the Nevis Island Administration and the Government of Japan.

Mr. Hector’s comment came on Thursday at a small but significant signing ceremony between the Japan International Corporation Agency (JICA), the Federal Government and by extension the NIA, at the Ministry of Agriculture’s Conference Room at Prospect. The event signalled the conclusion of Phase II of the project.

The Minister noted that the time was ripe for a revitalised fishing industry on Nevis. He said the facility would upgrade the industry and pave the way for a better life for the island’s Fishers.

Mr. Hector used the opportunity to thank the visiting team and said he was hopeful that the project would be moved to another stage closer to the completion of the fisheries centre.

Permanent Secretary in the Ministry of Agriculture Dr. Kelvin Daly, explained that the signing signalled the completion of phase II of the baseline survey and the articles of understanding between the NIA, the Federal Government and donor country Japan 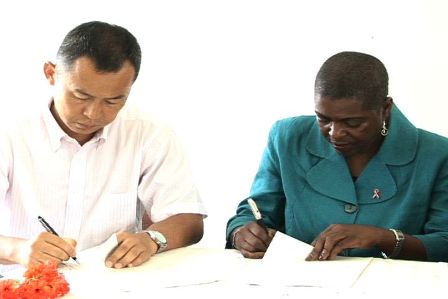 “What we have signed this morning is just articles to indicate there is a level of understanding between the donors and the benefactors. It is in no way a done deal, we are hoping it is in the future but in this document it indicates the terms of which we are going to be operating and to get this project moving forward. So I am very happy at this point that we have reached this far and with phase II being completed, now we are simply waiting for Phase III to be enacted by the Japanese Cabinet,” he said.

“Today’s signing represents a very significant step towards the establishment of a fisheries centre in Charlestown, Nevis. It is going to be a very significant achievement for the Fishers and the Nevis Island Administration as well as for the people of Nevis.

“As we have indicated before, this Fisheries Centre as it is named indicates that it is time for the Nevisian fishermen to step up in what we would want to see as increased fisheries development with respect to the safety of fish, the processing of fish as well as an improvement in an all round presentation of fisheries in Nevis,” she said.

Dr. Anthony also said she was hopeful that the Government of Japan would approve the work that had been completed and at the next meeting, drawings for the proposed development could be presented.

Senior Advisor Fisheries Development Japan International Corporation Agency Mr. Shunji Sugiyama during brief remarks said JICA believed that the project, if completed, would provide a good opportunity for the fishers of Nevis to improve their fishing operations in one sport.

“They can get their fuel, they can have their engines and boats maintained and they can handle the fish in more hygienic and safe conditions and also consumers can have a high quality fish from the centre.

“So in this way we believe this project will serve for the better utilisation and management of fisheries resources in this country and on behalf of JICA we would like to express or sincere gratitude to the St. Kitts and Nevis government for supporting the study of this mission. We believe that with this project we can enhance the relationship between the two countries further in the future,” he said.

Mr. Shunji Sugiyama and his team which comprised of consultants from ECHO and JICA representatives based in neighbouring Haiti and the Dominican Republic consulted with Fishers during their mission on Nevis.