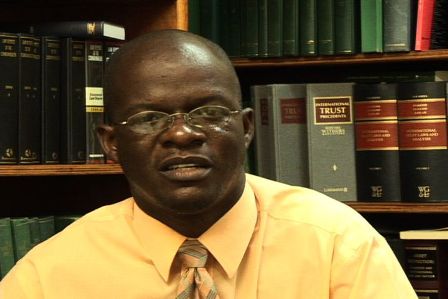 Attorney General and Minister of Legal Affairs in St. Kitts and Nevis Hon. Patrice Nisbett during an interview with the Department of Information, at the Ministry of Legal Affairs Conference Room in Charlestown on Thursday

Mr. Nisbett’s statement came in an interview with the Department of Information while on Nevis on Thursday. He explained that once the Bill became law, it would be used as a tool to enhance the crime fighting capabilities of the law enforcement agency in the Federation.

“This piece of legislation would be used as a tool in the crime fighting initiatives of the law enforcement agency in the country. All over the world in every democracy that you know about, there exists legislation of this nature and we have heard about the successes of the use of this particular legislation in order to assist in the detection and the prevention of criminal activity.

“We seriously believe that if this legislation is utilised in the way it ought to be utilised, we will be able to be more successful at our efforts to investigate and also gather the required evidence in order to bring perpetrators of crime to justice. So it’s all about improving our crime fighting capability so as to ensure that we deal with the criminal elements in our society,” he said.

The Attorney General noted that the relevant authorities had been aware that the technology was used for criminal activity and the Government was only responding with the legislation, to ensure that the Federation’s law enforcement agency had the requisite tools to deal with those who used the communications system to perpetrate criminal activity.

Mr. Nisbett said the legislation would establish a single legal framework, within which communications which came through public or private networks could be intercepted. Based on the provisions in the legislation, interception would be done in a very controlled manner, one in which the public would have the utmost confidence.

He used the opportunity to outline the circumstances under which the Court would grant authorisation to intercept communications.

“The legislation also has certain safeguards built in it, in that, it outlines the grounds upon which an application can be made. Those grounds are generally – if it is a matter that one considers is in the national security interest of the country then one is authorised to make the application. Also, if one wants information in order to detect or prevent the commission of a crime, one can then approach the Court with the necessary affidavit evidence. Then the Court will consider the merits of the application and a determination would be made as to whether the Order, in those circumstances, would in fact be granted,” he said.

However, Mr. Nisbett noted that in situations where an offence was being committed or about to be committed and the information was required but the only way one could get the evidence was through interception of communication, under the legislation, the Court would be authorised to make an Order which would give the Authorised Officer the necessary permission to intercept that particular communication.

According to Mr. Nisbett, the Judge would also stipulate the duration for which the communication should be intercepted.

“It would be directed to a particular officer and it also would indicate what use can be made of that particular communication that is intercepted. There are also provisions which deal specifically with the storage of the communication all in an effort to protect the ordinary citizens so as to ensure that their freedoms that are guaranteed by the Constitution are indeed protected,” the Attorney General explained.

The Minister of Legal Affairs also sought to calm fears and concerns of phone users and advised that they need not be apprehensive.

“Phone users will not be affected because it is not by mere caprice that one would get an Order authorising interception of communication…The way how the legislation is drafted there is an interplay between the law enforcement agents and the judiciary. So if it’s not a national security matter, it is not a matter in relation to the commission of a particular offence or in order to detect the commission of an offence, there would be no need to approach the Court to make an order in respect of a particular individual…

“The ordinary man using his cell phone texting he will not be affected. He will be able to continue to use his cell phone or whatever means of communication it is without any interference from the relevant authorities. He will continue to use his phones like you and I use our phones on a daily basis and don’t have to worry about this particular piece of legislation being used so as to intercept their communications. It is only in those narrow categories outlined in the legislation the law enforcement agency and the Director of Public Prosecution can apply to the Court and get the Order,” he said.

Mr. Nisbett also added that the legislation is drafted in such a manner that the judiciary played an important role, unlike some jurisdictions namely Jamaica, where one did not need a Court Order to intercept communications for seven days without an actual Court Order authorising the interception.

However, he said in the case of St. Kitts and Nevis, the Government was mindful of the rights of the individuals and had crafted the legislation in such a way that it balanced the right to intercept the communication and the right to protect the individual rights to privacy.