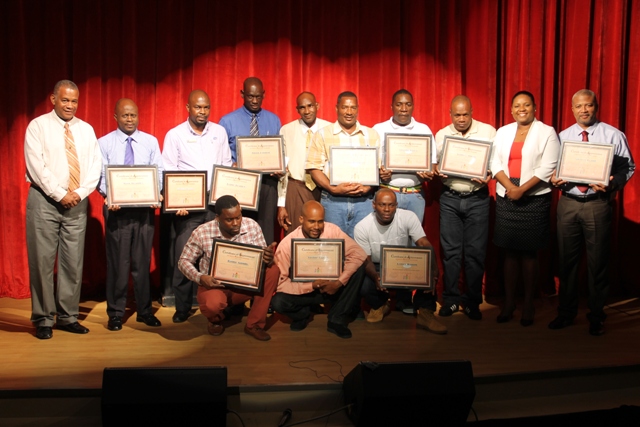 NIA CHARLESTOWN NEVIS (January 26, 2018) — The Circle of Peace Youth Programme a group dedicated to provide support and guidance to current and past inmates of Her Majesty’s Prison, held a ceremony to present awards to deserving persons. The event was held at the Nevis Performing Arts centre (NEPAC) on January 23, 2018.

Inmates, Mr. Ricky Ferlance, Mr. Lumumba Matthew and Mr. James Hamm, were awarded for the first, second and third place respectfully in the poetry contest. The theme was “My Actions, Experience and Pain. You don’t want to be me.” Former inmates Mr. Dustine Lapsey and Mr. Ramie Gumbs along with inmate Mr. James Allen were awarded for their efforts resulting in a remarkable improvement in their performances.

Hon. Eric Evelyn, Minister of Community Development in the Nevis Island Administration said any programme designed to assist the youths of St. Kitts and Nevis must be commended and supported.

He applauded founder of the 27 year-old group Mr. John Prentice and pledged the Administration’s continued support to in their continued help in the upliftment of young people.

Mr. Evelyn added that he liked the poetry contest which in his view sent a message to the community.

“It shows us that we should not condemn persons but we should assist them in whatever way possible because people can change; people do change and that is what we should encourage – people to change for the better,” he said.

The minister further stated that the poems could be used as a source of inspiration to the authors and the wider community. He said it is widely known that incarceration is not a bed of roses and the experience of those who lived it should serve as a deterrent to others trying to go to prison.

Founder of the Circle of Peace Youth Programme, Mr. John Prentice, encouraged the inmates to be productive citizens upon their release from prison and to keep pushing on.

“I applaud these guys who come from St. Kitts, those who get out of jail and make themselves somebody. So please, my friends, when you get out of prison, make yourselves somebody,” he said.

“Since 1991, I’ve been struggling with the Circle of Peace… but I have to help those who need help. My programme is to help those that need help… When you’re down, everybody wants to keep you down. You have to fight to get up,” he said.

Meantime, Mr. Gumbs, expressed the view that nothing or no one is all bad but what matters is what one chooses to focus on. He also applauded the programme.

“It is so easy to focus on the negative; it is the easiest thing to do. I commend this programme because it is not focusing on the shortcomings but on the true value and the worth of the human being regardless of what they might have done,” he said.

Other remarks were made by Mr. Wakely Daniel, Permanent Secretary in the Premier’s Ministry and Ms. Zahnela Claxton, Director of Youth on Nevis chaired the ceremony.