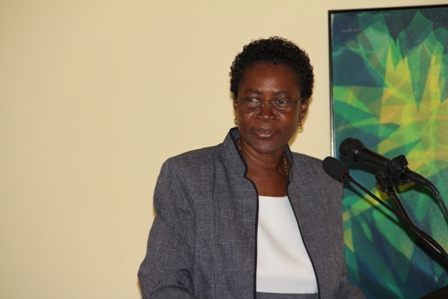 Ms. Mitchum who was responsible for the establishment of the Domestic Crimes Unit in the St. Christopher and Nevis Police Force, when she served the Federal Government as Minister of Women’s Affairs, spoke to a number of measures she deemed necessary for success in the campaign against violence against women.

“As we consider the way forward, in spite of the difficulties, we must continue to express a vision for a violence-free world. We must work to maintain a strong network of services by and for women who have survived violence against themselves and their children.

“We must continue to teach our daughters to expect equality for themselves and others. We must teach our sons to question sexism and reject violence, to respect women as equals and to work against all systems that are based on concepts of dominance,” she said.

Ms. Mitchum also expressed the need for women to continue to support one another in protecting themselves and to applaud those who said no to male violence, offered support to a friend and who protected one another from violence against women and children.

Abuse, she said, could have very serious physical and emotional effects and victims should be encouraged to get help.

“As we participate in the celebrations surrounding International Women’s Day, let us remember the women and children near and far who suffer in silence and do everything in our power to help them regain their self-esteem,” she said.

According to Ms. Mitchum, violence against women could take many forms and was not limited to mainly physical abuse. 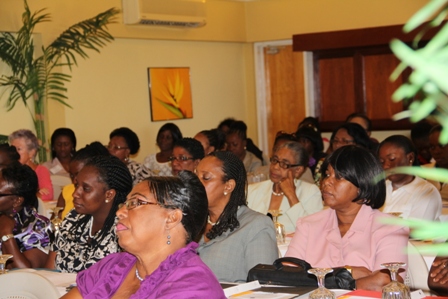 “Controlling what someone does or where they go is a form of abuse. So is deciding who someone sees or making all of the decisions for them. It also includes causing fear to someone and withholding required finances,” she said.

Nevis will join in the rest of the world in the observance of International Woman’s Day, designated by the United Nations on March 5th under the theme “A Promise is a Promise, time to end Violence against Women”.

The observance will take the form of an International Women’s Day March organised by the Department of Social Services, Gender Affairs Division in the Nevis Island Administration (NIA) from the Artisan Village on Old Hospital Road in Charlestown from 9:30 a.m. to the Elquemedo Willet Park.

All participants are required to wear something purple to show their solidarity for the cause of violence against women.