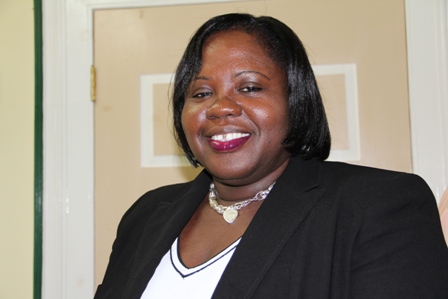 NIA CHALESTOWN NEVIS (March 08, 2013) — Social Development Minister on Nevis Hon. Hazel Brandy-Williams, encouraged all on the island to reflect on the progress made by women and what was needed to ensure their continued protection, promotion of their rights and international peace.

The Minister made the call when she delivered a televised address on March 07, 2013,  hours before Nevis  joined the world in the observance of the United Nations designated International Women’s Day under the theme “A Promise is a Promise: Time for action to end violence against Women”.

“Even as we celebrate acts of courage and determination by ordinary women, who have played an extra-ordinary role in the history of their communities and countries, let us promise to re-affirm our commitment to strengthening a culture of peace and zero tolerance for violence against women and children. As violence against women is a violation of their human rights.

“Furthermore, let us adopt a comprehensive and multi-sectoral response to end violence against women and children,” she urged.

Mrs. Brandy-Williams explained that the internationally recognised day was one which was annually set aside which celebrated the economic, political and social achievements of women, past, present and future. It also served as a reminder to all of the outstanding inequities in relation to women which still needed to be addressed.

The Minister also used the opportunity to refer to a worldwide survey which revealed alarming acts against women.

“A worldwide survey reveals [that] up to 50percent of sexual assaults are committed against girls under 16 years; that 603 million women live in countries where domestic violence is not yet considered a crime [and] up to 70percent of women report having experienced physical and or sexual violence at some point in their lives.

“With this type of alarming statistics the local, regional and international communities are strongly urged to commit or re-commit to changing the plight of women,” she said.

Mrs. Brandy-Williams further added that the Convention on the Elimination of all forms of Discrimination Against Women (CEDAW) required that countries which were party to this convention, took all appropriate steps to end violence against women and pointed to recent measures taken in Nevis that would advance the cause of Violence against Women.

“Here in Nevis, the Gender Division of the Social Services Department is seeking to play its part in ensuring that our Nevisian women are sensitized to the varying issues affecting their development.

On Tuesday, March 5, 2013 a successful Women’s Symposium was held at the Mount Nevis Hotel, with over 70 women from varying strata of society.

The event discussed issues such as The Newly Proposed Maintenance Act, Legal Recourse for Victims of Domestic Violence, Sexual Harassment, Women’s survival in a single parent household and Women in Politics,” she said.

On Friday March 8th the Department organised a march through Charlestown and a rally at the Elquemedo Willet Park which would give both men and women an opportunity to support and show solidarity, wearing the official colour purple, to women who were victims of violence.

“As the theme for International Women’s Day indicates, the time for action is NOW. So stop the violence against women,” the Social Development Minister said.

In conclusion, Mrs. Hazel Brandy-Williams thanked Nevisian Women, wished then a happy celebration and reminded them that they were the pride and joy of the nation.