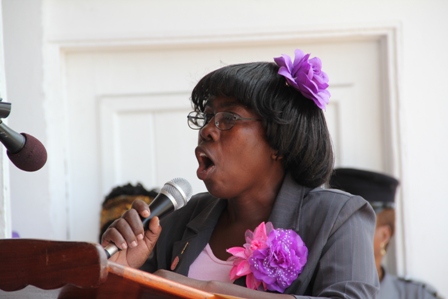 NIA CHARLESTOWN NEVIS (March 11, 2013) — President of Voices of Women (VOW) Incorporated Ms. Gweneth Browne, described an International Women’s Day rally on March 8, 2013, as an event which should give persons on Nevis the impetus to join in the fight against violence against women and girls.

Ms. Browne’s comment came when she delivered remarks at a March and Rally organised by the Department of Social Development in the Nevis Island Administration at the Elquemedo Willett Park under the theme “A Promise is a Promise – Time for Action to end Violence against Women”.

“This rally, like so many other efforts, should serve to propel us to act to stop the violence against women and our girls and all other forms of violence that continues to plague our society. Women and our girls deserve to live free from fear; the Police need better tools and assistance to deal with domestic violence and to improve the system to better meet the needs of battered women and their children.

“All citizens need to have greater awareness that violence against women and our girls is a scourge on our society and must be eradicated in short order. Victims need more voices to advocate for their rights and not be ridiculed as being weak or deserving of the violence that was or is being inflicted on them. We must bring an end to the re-victimisation of women and children by systemic policies and practices,” she said. 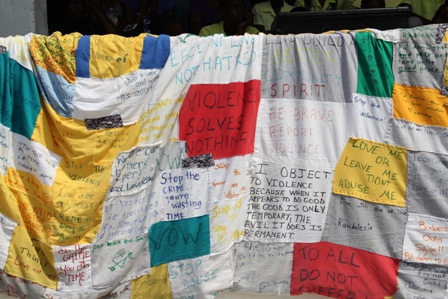 Ms. Browne added that women should not only be a sister’s keeper but a sister who stood in solidarity with victims of violence irrespective of the circumstances and hold abusers accountable for their actions.

“The community of Nevis needs to work together to have a zero tolerance of all types of violence. Let us pledge to support our NGOs and other support groups for victims. We must teach our children to reject violence and sexism and most of all we must be vigilante and active in the fight to prevent and stop the violence against women and our children. Stand up! Stand out and be counted,” she said.

Voices of Women Inc. a Non-Governmental Organisation (NGO) on Nevis, was launched in November, 24, 2010 and has been involved in the fight against violence against women and gender-based violence. The organisation’s first activity was to acknowledge 16 days of activism against gender based violence and produced a 50 foot quilt from recycled t-shirts which carried hundreds of messages against violence from the various communities in Nevis.

The organisation believes that violence against women was not only a women’s issue but a family one and by extension a societal issue.