CHARLESTOWN NEVIS (June 04, 2010) — A three month contract for the construction of a Hot Meals Senior Citizens Centre at Gingerland was signed on Tuesday between the Caribbean Development Bank under its Basic Needs Trust Fund (BNTF) programme, the Nevis Island Administration and contractor Mr. James Hendrickson of Strong Joint Construction and Home Improvement.

Permanent Secretary in the Ministry of Social Development Mr. Alstead Pemberton, who signed the agreement for the Administration with BNTF St. Kitts Programme Manager Mr. Osbert DeSuza, said the project was long awaited and was one that would be a welcome facility by the senior citizens on Nevis.

He said the existing senior citizens hot meals kitchen was house in a community centre in Butlers Village and expressed the view that the workers there would be happy on completion of the new facility for an environment that would be conducive to the production of the type of meals needed by the seniors.

The project will involve reconstruction of an abandoned 980 square feet single storey masonry building next to the Gingerland Police Station. A new timber – framed metal sheeted roof will be constructed on the existing walls, a new concrete floor will be poured and tiled and new windows, doors, plumbing and electrical fixtures will be installed. 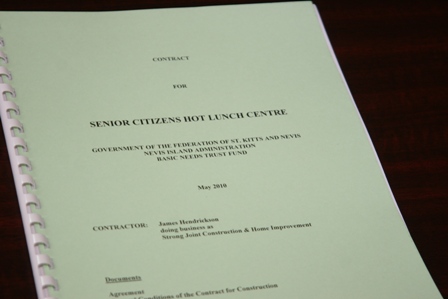 The contract for the Senior Citizens Hot Lunch Centre at Gingerland

Meantime, Mr. DeSuza said he was pleased that the project was at the stage where the contract was signed and that his organisation was always happy to be of service to the people of St. Kitts and Nevis.

“We want to assure the general public, those persons in particular who benefit from the hot lunch that is donated by the Nevis Island Administration, that this project aims basically to ensure that on a daily basis they are able to receive a hot nutritious meal.

“The Basic Needs Trust Fund office is always happy to be working with the communities in St. Kitts and Nevis. This is one of the projects that we have had mooted from the Gingerland community when we were working there some time in the past and I want to thank Mr. Hendrickson for tendering on the project. We look forward to working with him and the consultant Mr. Laurie Elms of Elms and Associates in St. Kitts,” he said.

Caribbean Development Bank Representative Mr. George Yearwood who witnesses the contract being signed said on behalf of the Canadian International Agency (CIDA) that they were pleased to be able to facilitate funding for the construction of the Senior Citizens Hot Meals Centre.

“The project has taken some time to come to fruition but I think that the mechanism for involving all stake holders, including the beneficiaries of the project in the designed process would ensure that the completed facility would meet the needs that it was intended to. 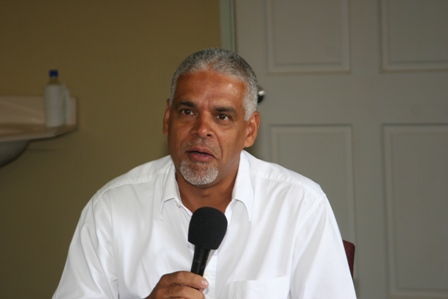 “This project is being implemented in the end of the fifth cycle of the BNTF programme we hope that the bottle necks we experienced and the lessons that we have learnt can be applied as we move into the sixth phase of BNTF,” he said.

According to Mr. Yearwood there were exciting times ahead and that Nevis had already submitted projects for financing and they looked forward to the documentation moving forward.

However, the CDB representative explained that they had moved in a direction that would closely monitor the development results of projects because contributors to the bank’s financing had demanded that they focussed more on outcomes and not just the outputs.

“At the end of the day, Mr. Hendrickson would have delivered an output that we anticipate would meet your needs so that when we return, everything would be complimentary. Favourable outcome is what we are looking for.

“So in terms of formulation and design of future projects, we would be looking more closely at the outcomes and that is how we will be reporting. So congratulations to all those concerned at reaching this milestone all eyes will now be on the construction process, that it goes smoothly and without any hitches and that at the end of the day equipment will be supplied and staff would be in place to deliver the expected outcomes,” he said. 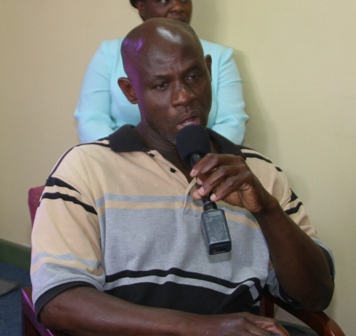 The small but significant ceremony was chaired by Mrs. Myrthlyn Parry BNTF Coordinator on Nevis. Other remarks came from Director of Social services Ms. Sandra Maynard and Mr. Hendrickson.