CHARLESTOWN NEVIS (June 02, 2010) — The symbolic ground breaking for the construction of a modern police station at Colquhoun Estate in Cotton Ground on Wednesday by Premier of Nevis and Minister responsible for Security Hon. Joseph Parry, was described by the Federation’s Commissioner of Police Austin Williams, as another step in the right direction in strengthening the police infrastructure on Nevis.

During his remarks at the event, Commissioner Williams said the new police facility, in addition to the recent commission of new police barracks at Butlers Village, the gift of a fleet of vehicles given to the police and the installation of a close circuit camera monitoring system, all made possible through the Nevis Island Administration (NIA), was evidence of the confidence the Administration had placed in the police and their work.

“These [gifts] I believe are more than tangible proof that the Government and in particular the Nevis Island Administration, recognises the needs of the police and are responding in kind.

“What we must take into consideration is that all these are coming at a time when we are experiencing an economic recession. Things are tight all over the world and so we are truly appreciative when the government can respond to our call, barring the competition for the scarce resources,” he said.

Mr. Williams referred to the occasion as an historic one, noting that the construction of new public buildings was not common let alone a police station. 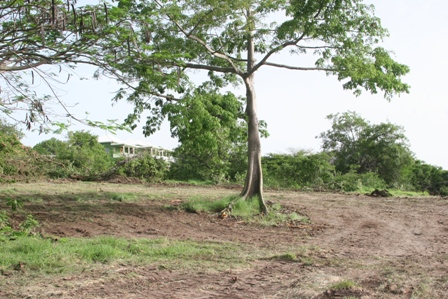 Nonetheless, the Commissioner said the new police station which would be positioned along the Nevis Island Main Road at the entrance of Cotton Ground Village, would embrace the public.

“This new facility will surely have a place for the community where we can hold neighbourhood watch meetings, training and other special events for the public. This is going to be the community’s building and we would want the people to feel comfortable visiting us and using the facility.

“Public faith in the Police Department is continuing to grow and our image continues to improve. We have done our best to become more involved in this community and be more visible to our citizens. We have also tried to be as transparent as possible,” he said.

While he thanked the government for its approval of the project at this time and its tangible demonstration of faith and support for the work of the police, Mr. Williams noted that the new police station would enable the police organisation to grow as a department and become an improved agency. 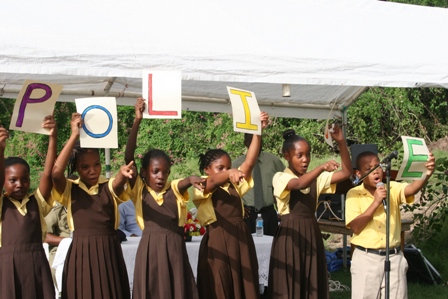 Students from the St. Thomas’ Primary School perform a heart warming skit in honour of the Police

During the ceremony, chaired by Cabinet Secretary in the NIA Mr. Ashley Farrell, students from the neighbouring St. Thomas’ Primary school rendered two heart warming performances – a skit and a poem – in honour of the Police.