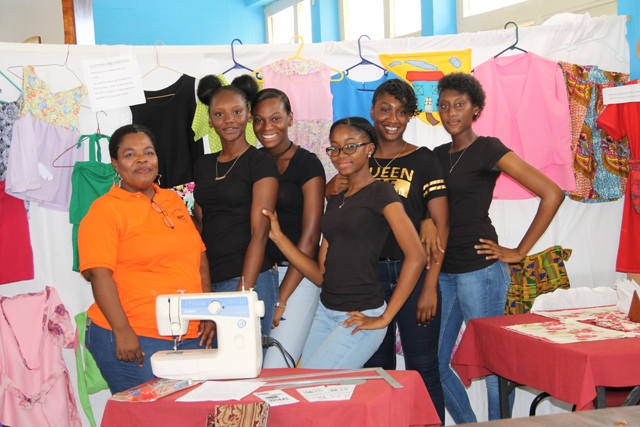 Ms. Mavis Parris (left) Clothing and Textiles teacher at the Charlestown Secondary School with some of her students at an exhibition (file photo)

NIA CHARLESTOWN NEVIS (August 03, 2018) — Mavis Parris, Clothing and Textiles teacher at the Charlestown Secondary School (CSS), will leave Nevis at the end of August for Indonesia in Asia, where she will pursue studies in Batik on a one-year scholarship funded by the Indonesian government.

Hon. Mark Brantley, Premier of Nevis and Minister of Education publicly commended Ms. Parris for pursuing the offer to study in in a distant land. He did so recently at his monthly press conference at the Nevis Island Administration’s conference room at Pinney’s Estate.

“I also want to commend Ms. Mavis Parris. She has received a scholarship to travel to Indonesia and this is being fully sponsored by the Indonesian government and she is going there to study Batik…

“Certainly Mavis is a very skilful young person and so we encourage her and thank her for making the effort as well. It is not easy sometimes to leave your life here and depart to some place as distant as Indonesia and so she is quite brave to make that effort…She will leave shortly and we want to wish her safe travels and good success there.” he said.

Mr. Brantley thanked the government and people of Indonesia for making the full scholarship available.

He explained that the scholarship was offered through a relationship he had developed with the Indonesian ambassador two years ago. The ambassador was instrumental in bringing a Batik training workshop to St. Kitts and Nevis and was impressed by the level of interest in the art, particularly in Nevis.

The Premier noted that as a government, the Nevis Island Administration is encouraging the development of small enterprises in the hope that they too would employ others, as the government and the private sector cannot absorb all who are in search of employment.

He stated that Indonesia is the home of Batik, and the idea is that at the end of her studies, Ms. Parris would return to Nevis and train others.