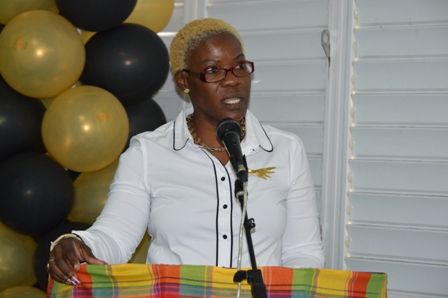 Teacher Librarian at the Charlestown Secondary School Library and Media Centre Mrs Marva Roberts at the unveiling of the Hall of Fame on February 07, 2014
NIA CHARLESTOWN NEVIS (February 10, 2014) — The Charlestown Secondary School (CSS) Library & Media Centre, unveiled its Hall of Fame on February 07, 2014, under the theme “Remembering the Past, Shaping the Future”  with a special salute to Sir Simeon Daniel: a Hero among Heroes. The unveiling was done by Premier of Nevis and Minister of Education Hon. Vance Amoy and CSS Principal Edson Elliott.
In brief remarks, the brainchild behind the project Mrs. Marva Roberts who is the school’s Teacher Librarian explained that the project was in tribute to persons who had paved the way for a modern Nevis on the occasion of Black History Month, observed annually in February.
“Today, it is my honour and privilege to be a part of something so important and that I am very proud of, to be able to contribute a little bit to so many who gave and lost so much, so that you and I can be who and where we are today.
“The portraits of these 11 faces honoured on this CSS Hall of Fame, will serve as reminders to us as proud Nevisians and as a black people, of the many struggles, blood, sweat and tears that those before us endured so that we can enjoy the lives we are living today.  They will also remind us that this journey did not begin with us but thanks to these brave men and women, we can truly say we are indeed free,” she said.
Mrs. Roberts in the words of Marcus Garvey stated that a people without knowledge of their history, origin and culture were like a tree without roots and as such it was fitting to pause, pray and praise the sterling contributions of our heroes. 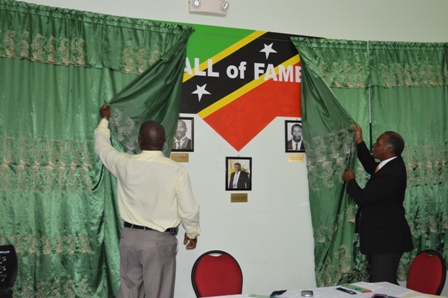 “Today we stand tall with pride and admiration, as we remember the unmitigated courage and selflessness of our heroes. We salute them for their courage, endurance, victory and fight for freedom.  Sir Daniel, first Premier of Nevis, thank you for giving so much. Elquemedo Willett, thank you for placing little Nevis for all to see.
“God Bless these great men and women who gave and gave selflessly. They will not be forgotten,” she said.
Among those who attended the event were Premier of Nevis and Minister of Education Hon. Vance Amory, Deputy Premier and Minister of Culture Hon. Mark Brantley, Permanent Secretary in the Ministry of Education Mrs. Lornette Queeley-Connor, Principal Education Officer Mrs. Palsy Wilkin, Principal of the CSS and Sixth Form College Edson Elliott, Deputy Principal Juan Williams, wife of the late Sir. Simeon Daniel Mrs. Sheila Daniel and their son Adrian Daniel and Akito Willett, son of Mr. Elquemedo Willett.