Emeritus Scientist with CAREC/PAHO and Joint IPCC Nobel Peace Prize Laureate 2007 Dr. Samuel C. Rawlins, PhD facilitator of the three-day Integrated Vector Management PAHO sponsored Workshop at the Llewellyn Newton Disaster Management Conference Room at Long Point, for Public Health Workers in St. Kitts and Nevis
NIA-CHARLESTOEN NEVIS (November 09, 2011) — Facilitator of a three-day workshop on Integrated Vector Management in St. Kitts and Nevis Dr. Samuel C. Rawlins PhD, told Public Health Workers from Nevis and St. Kitts, that Dengue Fever was cause for concern to everyone in the Federation, since the moisquito which carried the illness was present in the Tropics including the Caribbean, where tourism was the mainstay of many islands.

His advice came when he delivered remarks at the opening ceremony of the Pan American Health Organization (PAHO) sponsored Workshop at the Llewelyn Newton Disaster Management’s Conference Room, at Long Point on Monday. He noted that the illness affected every member of the community therefore, it was important to fight the vector which was present in St. Kitts and Nevis.

“I live in Trinidad some of the time and we have already had quite a few deaths due to Dengue Hemorrhagic Fever, that is the severe dengue, especially in young children…We live here and we have to stay and try to fight it, since most of the industry in Nevis and St. Kitts is geared on the hospitality industry, that is tourism,” he said.

Dr. Rawlins, an emeritus Scientist with the Caribbean Epidemiology Centre and the Pan American Health Organization and a member of the  Joint Intergovernmental Panel on Climate Change (IPCC) Noble Peace Prize Laureate, 2007, said visitors selected the places they chose to visit where they were confident they would not get ill. Thus, it was vital for the environment in St. Kitts and Nevis to be above board and well known for little or no transmission taking place there. 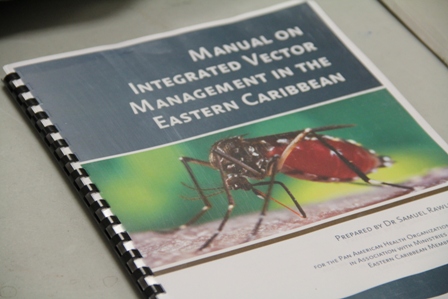 Notwithstanding, Dr. Rawlins stated that the islands should also be prepared against other vector borne diseases, some of which were imported and known to be present on St. Kitts and Nevis.

“We know there are two potential vectors on the island of Nevis and we understand that there is at least one or two in St. Kitts. So we need to be aware of this.

“I have worked throughout the Caribbean and I have seen in countries like the Cayman Islands and the Bahamas where people are moving around and some of them come from Malaria endemic countries. When they come in they are not going to report to you that I got fever, headache and all the symptoms which are suggestive of Maleria, especially if they come in illegally…As a result they remain as a resevoir in the community and then the vectors which transmit Malaria come and bite them and then transmit it to the othere people because we have the vectors here,” he said.

During the workshop which concludes on Wednesday, participants would be given the chance to modify and make changes to a Manuel on Integrated Vector Management in the Eastern Caribbean compiled by Dr. Samuel, to meet the specific needs of the Federation. 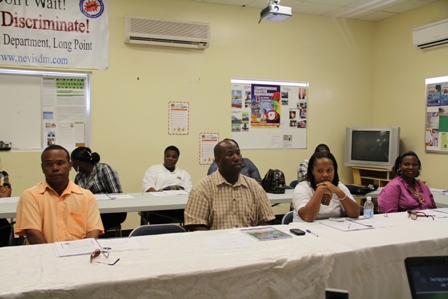 The Manual which was compiled following a series of consultations on behalf of PAHO and the Ministries of Health of East Caribbean Member States, had already been examined in Barbados, Grenada, St. Lucia, St. Vincent and Antigua  ahead of St. Kitts and Nevis and tailored to the needs of each.

“Initially I am going to introduce the manual. We hope that after these discussions we get the new manual we make the modifications and then each person will his or her own copy. We will have copies here for new staff who are coming on for training, so that is going to be important,” he said.

The Manual is made up of seven modules among them Moisquito Vectors and Moisquito-borne Diseases of importance in  the Eastern Caribbean; Integrated Vector Management (Control) Measures and their Application to Dengue Fever Vectors and other Common Vectors in the Eastern Caribbean Countries;Work of Vector Control Operators; Discipline/Work Etiquette and Other Selected Athropods and Resevoirs of Public Health Importance.